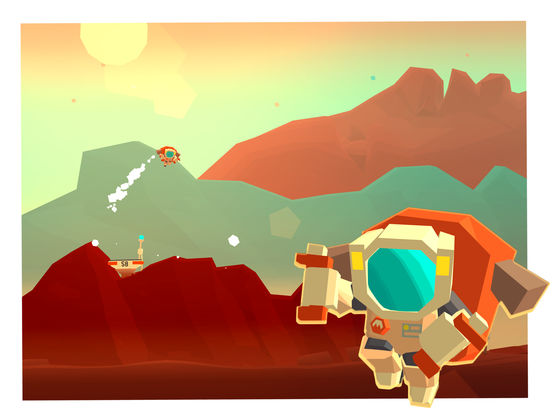 Ever wanted to go to Mars? MarsCorp has got you covered! In Mars: Mars, you jump around Mars as one of the first humans to ever be there! However, MarsCorp isn’t really a company known for quality, so they’ve cut some corners. Your jet pack barely has enough fuel for a couple seconds of flight, so that means you’re going to need to skillfully jump from platform to platform in this simple yet challenging game. Let’s explore Mars together with our Mars: Mars cheats, tips and tricks strategy guide!

The small bulb on the platforms will indicate how fast you’re going. When the light is yellow and silent, you’re descending at a safe speed. If it starts beeping and flashing red, you’re going too fast and maintaining that speed will result in a crash! Listen and watch the lights to make sure you land safely.

2. Use your jetpack in short bursts!

Light taps are the key to success in this game! You have a very limited amount of fuel between each platform, and running out midair is almost always a death sentence. Generally, it is almost never a good idea to use your jetpack for continuous stretches. Instead try to balance out by using it in short bursts. Just a little tap is usually enough to nudge you in the right direction, then you can let gravity do the rest of the work.

Smart fuel usage is first step to victory, but the second step is controlling your descent. For the most efficient drops, you want to line up your character with left boosts until they’re set in a trajectory to land on the platform. From there, you can let go and use both boosters to slow your descent while maintaining the same trajectory. Mastering this trick is the best skill to have as you play this game!

5. Go for the combo achievements!

If you’re looking to unlock more playable characters, try to go for the combo achievements! Have you noticed the number below your fuel gauge at the top left corner? Landing on a platform without crashing in between will up this counter. You will also notice a white meter build up along the edge of the counter – this is your progress towards the next combo achievement. Every time the meter fills up, you reach the next milestone and you’re rewarded with a bunch of coins you can use to unlock a new character. The first one is at 6 jumps in a row, then 12, 24, 60, 120, and finally 360. Good luck going for that last one!

That’s all for Mars: Mars. If you have any other base jumping tips or tricks to share, let us know in the comments below!