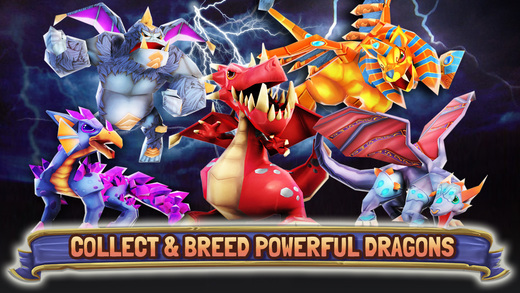 Mark of the Dragon is a city management game that pits you with the task of raising dragons – yes, dragons – to fight off other player’s advances! Become the ultimate dragon trainer and build a massive city! We’ll help you out with our Mark of the Dragon cheats, tips and trick strategy guide!

Your main resources in this game are lumber and iron. The iron mines and lumber mills are your generators, while the lumber depot and iron depot are where you stash it all. Remember to keep these buildings upgraded so that you get more resources faster and in larger quantities, and you can hold more. There’s no point in finding a lot of resources if you have nowhere to put it!

2. Need some extra resources? Try out the single player raids!

Raids involve you attacking another camp to pillage their loot! You can do this to other players or by taking on the pre-made single player missions. Before you try attacking another play, I highly recommend trying the single player missions first. They’re designed to show you what you should expect when you attack another player, and the best ways to strategize. They’re also worth a decent amount of iron and lumber, too!

When you raid another city, you get an overview of all their buildings. Don’t jump the gun and just let your dragons run amuck, as that’s the quickest way to get them wounded. Instead, take a second to study their city. Check where all their defensive buildings are, such as any Drakecapults, Troll Towers, and the like. You want to target these first as taking out any threats to your dragons first leaves the city a sitting duck. It’s important to keep in mind that when you select a dragon, you can tap a tower to make that dragon immediately attack that specified tower once he flies in. You can also do this at anytime to have a dragon switch targets. So, remember: take out the defensive buildings first!

4. Use walls to protect your most valuable buildings!

You can put down walls to protect your buildings against ground units. Dragons are unaffected by walls, as expected! A single wall is relatively cheap, clocking in at 150 lumber. They don’t last very long, though. However, leveling up a single section of the wall takes a whopping 800 lumber!! What you want to try to do is make a general wall around your whole city that has only level 1 walls. Then, for your most valuable buildings, such as your castle, making a level 2 wall around it, so you don’t waste all of your lumber on just walls, because remember that the main thing you need to worry about are dragons, which are completely unaffected by walls!

In order to level up your dragons, you need to obtain the incredibly rare dragon scales. These scales, so far in my time playing, seem to only come from completing the daily challenges, so be sure to do them! They’re not too bad as well, as they usually task you with simple things that just take a while. For example, the first daily challenge I got was to collect 10,000 iron, which was completed in a few hours.

6. Load up on defensive towers!

Since your city itself is open to attack, you can never have too many defense towers. Troll towers and Drakecapults are really good for defense, but also consider looking into goblin silos. These underground rocket silos fire off huge missiles that do tremendous damage to both dragons and ground units. Their only downside is that it takes quite a while to load a rocket, so they have incredibly slow firing speeds, but man is it worth it once they’re off. Needless to say, you should also opt to take these out when you’re raiding someone else.

7. Don’t forget about your ground units!

You start off with a summoning portal that allows you to recruit new ground units. While these units are nowhere near as destructive as your dragons are, they are a good supplement to your team. Furthermore, you can also build a Boot Camp later to level up your units and make them stronger. When on the field, having your dragons and ground units work in tandem is a great way to make the most use out of your team. For example, you can have your dragons blast away at walls while out of range of any defense towers, which will allow your ground units to move in. While they’re taking the full force of the attack, your dragons can then move in and reign terror without being fired upon.

That should be a good send off on your journey to becoming the ultimate dragon trainer! If you have any other questions or suggestions, leave a comment below.

Learn More About League of Legends: Wild Rift Champions In These...