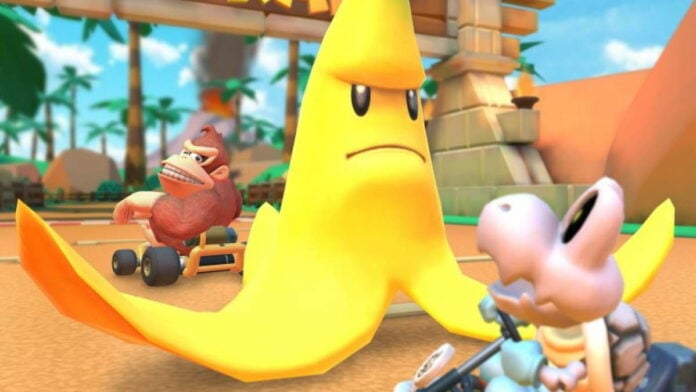 The Coin Box will spew out a flurry of coins in front of you in bursts. Since Coins and combos are the key to getting really high scores in Mario Kart Tour, it’s no mystery why the Coin Box is frequently seen as the best item in all of Mario Kart Tour.

Lucky 7 spawns a Green Shell, Red Shell, Banana Peel, Mushroom, Blooper, Super Horn, and a Bob-omb around you. The versatility of Lucky 7 makes it an incredibly valuable item, allowing you to approach opponents offensively and shield yourself from attacks.

The Boomerang Flower spins around in a frontal cone, damaging any racers in front of you. It can hit multiple foes, but it can also pick up any nearby Coins it passes by!

The Giant Banana needs no introduction, as you’ve probably experienced first-hand why these behemoths are so good. Giant Bananas are incredibly difficult to avoid when placed just right, and they split into smaller bananas when hit, leaving even more obstacles for your opponents to avoid.

The Triple Bananas have always been a solid item option, but with the recent buff, they’re even better now!

Related | How to Get Pauline (Rose) in Mario Kart Tour

The Dash Ring is always going to be a contentious item, but we honestly think that it does more good than bad. The Dash Ring spawns multiple blue rings in front of you, giving you a short speed boost with every ring you drive through. The catch is that other opponents can use them as well, but we think the item is too fun to pass up!

The Super Bell functions just like the Super Horn, except that it lets out three shockwaves with short intervals between. You can absolutely wreck a large group of racers with this, and there’s a good chance any counterattacks they might be hiding up their sleeves will be thwarted by the other shockwaves.

One of the best forward-throwing items in the game, Bowser’s Shell is a massive shell that can demolish anything in its path. It sticks to the center of the road while moving forward, and it’ll curve towards racers in an attempt to crush them.

The Triple Mushrooms are pretty straightforward. There’s never a time where three free boosts are useless!

Functions like a Red Shell, but bursts into random items when it hits an opponent. You can hit an opponent, then grab a Mushroom that drops out for a powerful combo.

Functions like Yoshi’s Egg, but the items come out the other way.

Regular Bob-ombs, but two of them? Don’t mind if we do! Bob-ombs are strong projectiles since they explode and can hit nearby racers.

Fires off an ice ball that freeze opponents on contact. While this doesn’t immediately spin them out like a normal Fire Flower, the freezing effect can completely screw over unsuspecting victims.

The Super Leaf is too disruptive to be useful. You can collect Coins and attack players, but every time you perform the attack you’re interrupting drifts, often making you drop combos. The range is incredibly short too, so it’s hard to recommend the Super Leaf.

The Triple Green Shells can be used for offense or defense. Oddly enough, you throw all three Green Shells at once, which makes them a bit less versatile.

The Mushroom Cannon spews out Mushrooms at a rapid rate in front of you. You can then drive over them to get a short speed boost, but like the Dash Ring, your opponents can also benefit from these. The reason we rank the Dash Ring higher is that they’re much easier to get through, and there’s less of a chance you’ll shoot a Mushroom right onto an opponent.

Hammers function like Red Shells, but you need to be very close to your opponent in order for them to seek out enemies.

The Bob-omb Cannon shoots out Bob-ombs in front of you at a rapid pace. These Bob-ombs explode upon contact, unlike the regular Bob-ombs, but that makes them a bit harder to use.

The Giga Bob-omb bounces around for a while before exploding. The explosion radius is much bigger than the regular Bob-omb, but these things are really hard to aim because of the bounce factor.

The Banana equivalent of the Bob-omb Cannon. Sure, spewing Bananas everywhere is pretty fun, but placing them strategically is much better.

The Heart protects you from a single item, which is nice, but it lacks the absorption factor from the past Mario Kart games.

Arguably the worse item in the game, the Bubble will protect you from items and give you a small speed boost. The problem is that the bubble pretty much takes all control away from you, so you won’t be able to generate any combo points.

And there you have it—a list of what we think the best special items are in Mario Kart Tour. We’re sure that you have your own opinions and thoughts about the items, so please let us know in the comments below what you think.