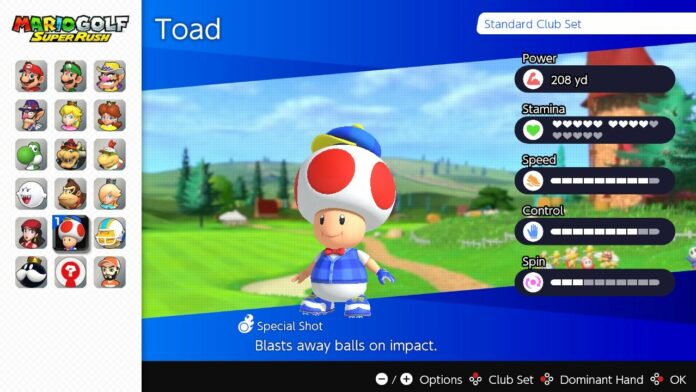 Mario Golf: Super Rush features 17 playable characters that all come with different stats and their own unique abilities that make them better suited for certain play modes. As such, knowing which character to pick is extremely important to pull off victories and become the best Mario Golf: Super Rush player around.

Here’s everything you need to know about Toad, a character that can be a little tricky to play properly.

Toad’s Special Shot is Super Toad Strike, a special shot that increases the ball’s size and blasts away other balls on impact. While this Special Shot works like other similar ones, the increased range of effect is extremely welcome.

Toad’s Special Dash is Tumble Dash, a fast-moving maneuver where Toad flips around to knock down any opponent on impact. This Special Dash is a little disjointed, as you need to aim the flips properly to knock opponents down, and the fact that Toad has so little Stamina makes this special move not all that worth its cost.