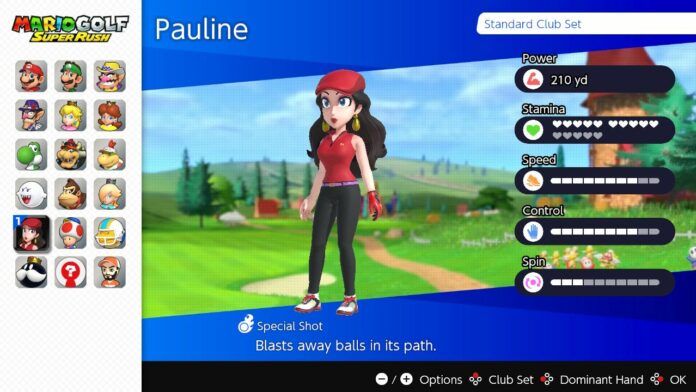 Mario Golf: Super Rush features a diverse character roster that allows all sorts of players to find the right character for them. While some of the game’s characters are clearly above all the others, the roster is mostly well-balanced, allowing players to pick any character they want and still have a good chance of winning games.

Here’s everything you need to know about Pauline, the mayor of New Donk City and one of the Mario series’ oldest characters.

Pauline was made popular again by Super Mario Odyssey following her debut in the original Donkey Kong, so it’s not surprising to see her make her debut in the Mario sports series with Mario Golf: Super Rush. The character is among the most balanced in the game, featuring decent Power and Stamina and high Speed and Control, which make her a great choice for all play modes if you like being accurate and extremely effective.

Pauline’s Special Shot is Songbird Stinger, a special shot that blasts away all balls on impact. Unlike other similar Special Shots, which only blast away balls on impact, Songbird Stinger grants Pauline a Speed Boost, which can be quite useful in a lot of different play modes. By using the blast’s properties and the boost, you can really mess up the opponents’ strategies, especially if they are close to the green.

Pauline’s Special Dash is Diva Dash, a short running dash where Pauline can knock down opponents if she hits them directly. The small hitbox and the floaty jump at the end of the dash make this Special Dash a little difficult to aim properly, requiring your timing to be impeccable to be effective.