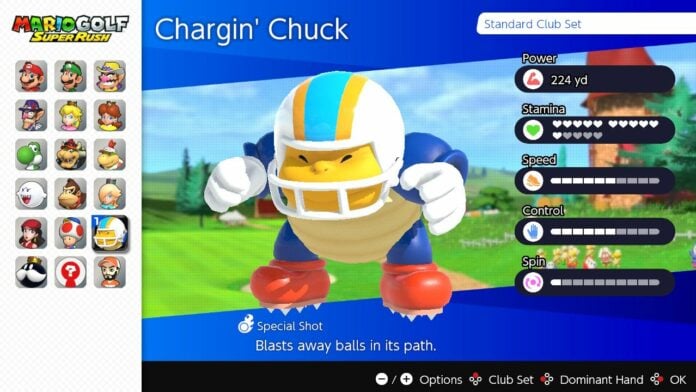 Mario Golf: Super Rush features a big character roster that includes 17 different characters coming with their own special abilities that make them more or less useful in different play modes. While some of these characters are great for newcomers, a few others are only meant to be played by those who have mastered the game mechanics.

This is the case of Chargin’ Chuck. Here’s everything you need to know to play the character properly.

Chargin’ Chuck is a very weird character, and one of the trickiest to use properly in all of the game. Despite being a Power-specialized character, the Power stat is considerably lower than that of similar characters like Bowser and Donkey Kong. His average Speed, Control low Spin and hard to use Special Abilities make Chargin’ Chuck one of the characters that only Mario Golf: Super Rush masters will be able to use properly.

Chargin’ Chuck Special Shot is Scrimmage Stinger, a powerful shot that blasts away all balls in its path that must be used away from the hole to be used effectively.

Chargin’ Chuch Special Dash is End-Zone Dash, a charge-and-dive dash that knocks down opponents on impact. As it feels a little stiff, using End-Zone Dash can be a little tricky, making it worth its Stamina cost only when you absolutely need to knock down an opponent. Chargin’ Chuck needs Stamina for regular dashes due to his low Speed, so saving Stamina is generally a very good idea.