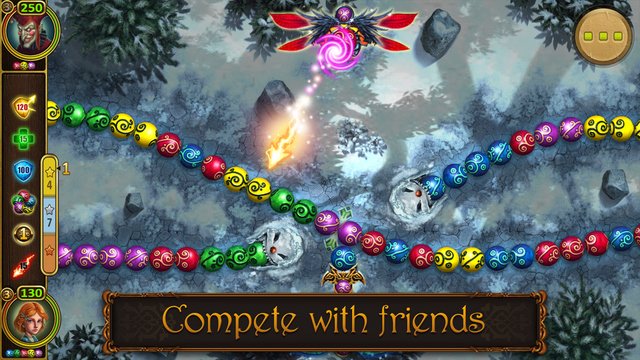 Marble Duel is an extremely interesting game, a violent version of Zuma or Luxor where you match titles in a quest to defeat an opponent in what I can describe only as a surprisingly addictive game of epic proportions and one of the best titles that I have played recently. However, I am not here to praise the game for all the right reasons, but instead to share with you a complete set of Marble Duel cheats and tips for a complete strategy guide that will hopefully help you get all the three star ratings that you need.

So let’s not waste any time! If you can’t win in a stage or you simply want to up your game a little bit, Touch Tap Play’s Marble Duel tips and cheats will surely help!

– The balls that you have: you can see them and switch between the balls that you are shooting to further help your strategy. Have this in mind when going for a specific strategy
– The types of matches that you make. Different colors have different effects on the board: although your goal is to destroy your opponent, it’s not all about the red balls! Mix and match and go for the biggest possible combos to get extra moves
– The balls the opponent has: you can also see both of them and decide what matches to make based on that.

3. Purchase the upgrades smartly
With the earnings that you get from completing the stages, you can purchase upgrades to your stats. For the early stages of the game, I recommend you follow this route: Red Balls first (for extra damage, probably the most important thing), Blue Balls second (to increase your shield and dodge as much damage as possible), one upgrade to your health and then Green Balls. Alternately, the Purple Balls could be considered a better option than the Health balls. Always focus on upgrading your damage, because that’s what wins you matches!

4. Focus on combos
Build your board to create combos: the more matches you make, the more moves you will get, so always try to go for these combo moves (you need at least three matches for one extra move). If no combos are available, go for the longest pair, but consider your stats: for example, if you’re on full health, it might not be a good idea to go for a five marble set of green balls: fewer red or blue ones might be just better!

5. Replay unmastered stages after upgrades
You might not be able to win all stages with three stars after your first play, and that’s completely natural. Keep on playing, get more crystals and after you buy a few more upgrades, get back and get the stars that you are missing. It’s the easiest and only way to do so. Just have in mind that there is no reason to replay stages that you have mastered already because you won’t win any extra rewards!

7. Eye on the shield!
On rare occasions, your opponent will manage to get its shield to 100%, in which case it will dodge any attack from you – so always keep your eye on the shield and go for a weak attack if the opponent has it maxed out.

These would be for now our Marble Duel tips and tricks. If you have other suggestions, let us know by commenting below!