Originally released back in 2003, MapleStory was one of the most exciting and popular MMORPGs to make it to this world. With its unique approach and quirky visuals, it became an instant hit. And soon, you’ll be able to re-live the experience in an enhanced matter: MapleStory M is coming to mobile soon!

It’s really exciting, actually and I am sure that the upcoming release of the mobile version is exactly what MapleStory players need: a breath of fresh air and a new way to experience an otherwise amazing game. Plus, a chance for even more people to enjoy this game when it comes to mobile.

The great news is that most countries can install and play the beta version of MapleStory M right now on the Play Store. The beta stage can only be downloaded until January 30, so make sure you get there and install the game to be among the first to play it.

Players who partake in the beta will be the first to explore Maple World with five unique characters, team up with friends to explore mysterious dungeons and get a sneak peek into the various customization options, including the all-new forge system. 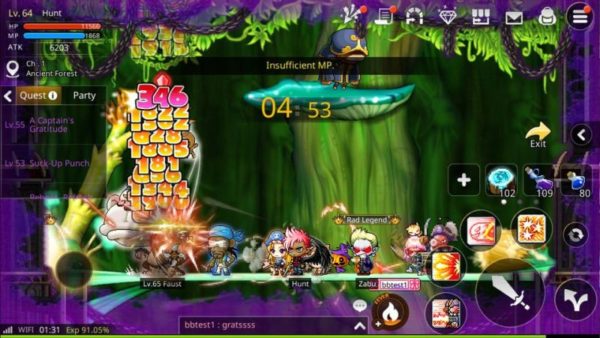 Those who have played or are still playing the original MapleStory MMORPG will be very happy to see that the style of the game and many of its original versions will make their way to the mobile version as well. For example, we’ll get the option to play 5 of the original characters (Dark Knight, Bowmaster, Night Lord, Bishop and Corsair), but also familiar monsters and landscapes.

We’ll be able to join up with other people and battle the iconic Zakum, discover the mysteries of Nett’s Pyramid and defeat the martial arts master himself, Mu Gong.

In other words: there’s a ton of fun awaiting in MapleStory M. You can already install and play the beta if you own an Android device, but if you don’t, you will still get the chance to play it later this year when the game is scheduled for a full release on both iOS and Android.