Maguss is an insanely beautiful augmented reality game with a wizardry theme. Many call it “Harry Potter GO” as it seems to mix the Hogwarts universe with the Pokemon Go concepts. Well, we do have a Harry Potter Wizards Unite AR game incoming, but this one will definitely give it a solid run for the tops spot on the charts. It’s that good!

And we’re here to help you get better at Maguss by sharing here a complete strategy guide for the game: Magus cheats and tips to help you become the ultimate wizard in the world. And there are many features and things to consider when playing the game too, so you’ll be extremely happy you’re reading this, especially if you’re just starting out.

So take a break from the game (I know it’s difficult) and read on for the complete guide for the game. Here are all the Maguss tips and tricks that you need to know:

What character to choose
I doubt that many people do this research before starting the game, but here is my take on the best character to choose in Maguss. You can only make the selection when starting the game and you can’t change that afterwards (although there might be a future update that will allow us to do so for a heavy price). Either way, all characters are good, but I believe that some are specifically better than others. 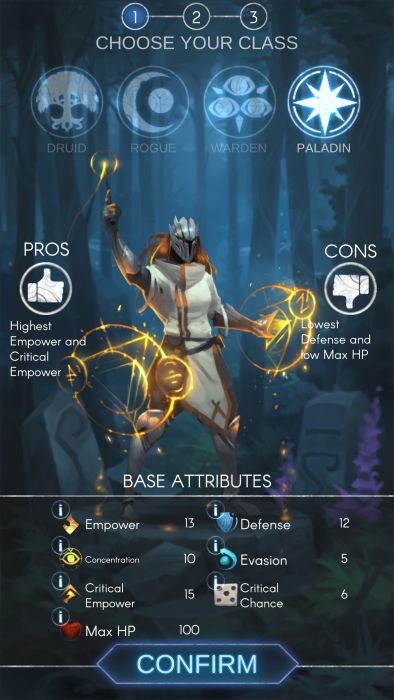 Since this is a game of wizardry where casting spells is the most important part of the game, you should choose a character that does that best. And that is the Paladin in my opinion, as they cast powerful spells that are more likely to hit than others. The Rogue is also a good choice and I can see people doing good with a Druid as well. So you do have options!

Practice the rune drawing
Although there are a ton of spells that you can unlock in the game, you can only equip a small number when you play. The good thing is that spells don’t have a different rune that you have draw on your phone’s screen. Instead, the slots do, which make things a lot easier.

However, you should still practice drawing those runes and make sure that you always do them right. You want to cast the spells as fast as possible because you need them all cast in order to win the battles. Combine that with the limited amount of time, and you know that you have to be good.

What spells to focus on unlocking early on
There are four different spell categories that you can learn, with the general rule of thumb being that the more spells you unlock in a category, the better they will get. However, since these spells are extremely expensive, it doesn’t hurt to focus on specific categories that have good spells that will help you along the way.

The four categories can be divided in two main areas: attack spells (Dark arts and Sorcery) and defensive spells (Charms and Invocations). Early on, since you only have 2 slots, you should fill them with an attack spell and a defensive one. But which to choose?

I personally believe that, for the long run, the Dark Arts spells. These spells deal damage over time generally and are active for more turns, giving you the chance to perform healing on your character, but still deal damage. Early on, this doesn’t matter too much, but as you grow up the levels, it helps a lot.

However, the Sorcery spells deal instant damage and that is extremely useful against monsters early on in the game. Fortunately, you start with the magic arrow which should be your base spell for a while. I recommend unlocking spells in this order early on, until you reach level 10 in the game:

Magic Arrow (by default), Heal Light Wounds (during tutorial), Essence Leech. Then carry on working on the Dark Arts spells until you get Creeping Death, which is a really good spell: 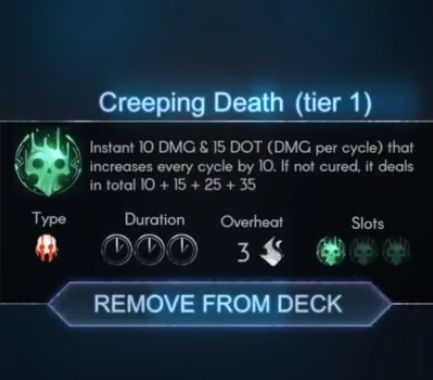 Then work to unlock Energetic Strike under Sorcery (tier 2): 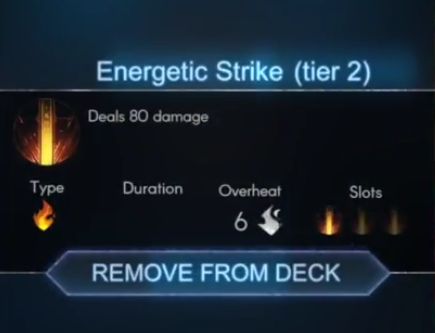 Then find a balance of unlocking spells, focusing to get on the Tier 4 spell under charms, Heal Serious Wounds.

Spell casting strategies
No matter how many spells you have unlocked, you will still have a limited amount of slots in your deck and you won’t be able to cast too many each turn. You unlock one new spell slot every 10 levels. However, there is some strategy that should be taken into consideration, and it usually goes like this:

– start each battle by casting your damage dealing spells. Usually spells that require fewer slots in the battle are best, and you can also end up with a Damage over time spell like Creeping Death. Early on, it’s usually enough to cast magic arrows to win the battle easily

– if it is a more difficult battle that takes more turns, start mixing in your more advanced spells and healing. Depending on the amount of damage you have received, cast healing spells and damage dealing ones. Try to use heal spells as often as possible in order to keep your character in top health, which is useful in later battles as well.

Basically, you will always do this: try to take out your opponent as fast as possible, while losing as little health as possible. Know your spells and the amount of slots they need in each battle and use them accordingly. If battles take more than one turn to be over, healing becomes vital, so make sure you cast it at least once during the second turn (usually, there’s no need to heal during your first turn).

Buy potions from the store and brew them
Potions are extremely important and there are two ways to get them: buy them directly or brew them. Brewing them takes more time, but it’s the preferred method because it’s the cheapest and you need resources like crazy in this game.

In order to brew a potion, you need to buy a recipe scroll from the store. But once you have that recipe, you will be allowed to keep on brewing that potion over and over again, so it’s a cost worth paying. You also need ingredients which you will collect by playing the game. Finally, you will need to complete the crafting minigame (pop bubbles to increase the quality of your potion):

There are all sorts of potions available in the game, but not all can be crafted until you reach a specific brewing level. But you can buy any potion directly if you have the resources, so if you really need a super advanced potion and you have the money, you can buy it directly. But I would only recommend to focus on brewing your own and unlocking new recipes. It’s the health potion that you will need the most, anyway!

Battle everything & collect everything
It is extremely important not to ignore any opponent on the map, nor any items you can collect. Maguss is a game where grinding is what you have to do in order to get better, so make sure that you constantly check it out, battle everything and collect stuff. This will help tremendously in the long run, and the more you fight & collect, the better you will get (and faster you’ll get there).

The Chests are extremely important here as they hold a ton of goodies. You will have to do some walking to get them, so get up off your chair and go grab that chest! It’s well worth it!

Watch ads
After each battle, you will have the chance to watch ads to improve the rewards you are winning. This is highly recommended, especially if you’re not investing a lot in the premium stuff in the game. 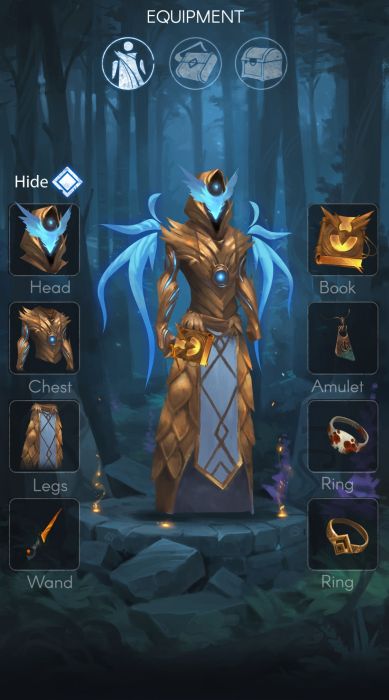 There are a ton of equipment pieces that you can buy from the store and even though those that are available for regular currency are not as good as the premium ones, they’re still better than nothing. So keep an eye on the store and purchase equipment to fill all your slots, then work your way on getting better and better stuff for your character.

It’s also worth hoarding premium currency for purchasing Luxury Packs (these offer great value) or at least invest in single bits of equipment.

Complete daily challenges
A great way to improve your character by earning a lot of coins is by completing the daily challenges. Try to complete them all each day, but don’t hesitate to refresh one of them – the one that’s the most difficult to complete. The rewards you get from these challenges are extremely helpful, especially early on.

Stay away from duels early on
Dueling other players is extremely fun, but I would recommend to stay away from it until you reach level 10. Instead, build up your character, learn the strategies behind casting spells and how battles work and only afterward jump into duels against other players.

These would be our Maguss tips ans tricks, aimed especially at beginner players. Do you have any other tips or tricks to share? Don’t hesitate to let us know by commenting below. Also, if you have any questions, ask them and maybe somebody will be able to help. 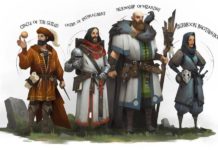 Maguss Guide: What’s the Best Character in the Game?