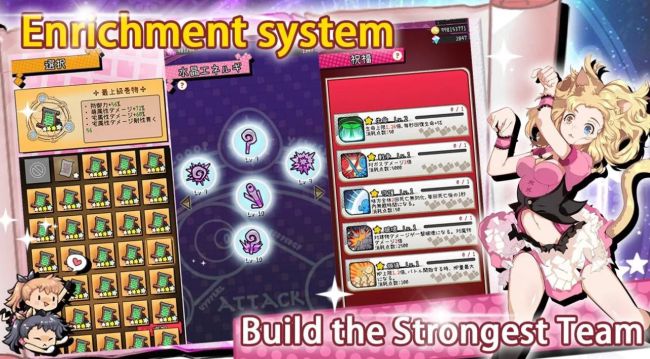 In today’s article we are going to take a look at all of the Magic Burns 9 Times tips and cheats that we have discovered so far and share them with you, so that you can pass more stages and get stronger every step of the way!

In this game, you will be able to manifest your creative destruction – demolish buildings, save girls, and take down monsters! All that, by using anime characters, of course! This game came unexpectedly fun and filled with more action that I initially anticipated. And probably that is why I had a blast playing it.

But enough with the introductions – you came here for all the Magic Burns 9 Times tips and tricks so let’s not waste another second and dive right in!

The game’s core mechanics are pretty simple. Once you master them, you will slowly start to learn how to apply them for more advanced setups later on in the game, such as better positioning and when to use the skills, how to combo them better and such.

But for now let’s focus on the basics so that you can have a better understanding of the game:

– You can tap the screen to move your characters in the direction that you want them to go.

– When you tap on a monster or a building your characters will head in that direction and attack it once they reach it.

– If your characters encounter another building or enemies in the path towards their set destination, they will attack those as well. They will basically attack anything that is in the way to their destination.

– Once you took down a building you can move your characters inside to convert the chars there and have them join your team – the more, the stronger you will be!

– When you are fighting bosses, you will need to change your team formation according to their attack. (but more about this below)

– When your heroes’ portraits are flashing, use their skills!

One pretty important thing in the game will be getting the right characters. That will help you get stronger and defeat more bosses much easier. The highest character star is 3 stars, so try to acquire those characters and form a good team with them.

You can summon more by using the game’s gacha summon system, which is located in the game’s main interface. There, just scroll down through the menu until you see the “Summon” one. Tap on it and you will open the character summons. There you can use your summon tickets or Gems to summon!

– Limited Gold Summon: This summon is a time limited one which will let you summon certain heroes with a higher % than the other summons. You can use your summon tickets to summon in the Limited Gold Summon. You can only summon 2 star or 3 star heroes.

– Gem Summon #2: From this summon you can also summon any character between 1 star and 3 stars and the cost is exactly the same as the previous Gem Summon – 150 per 1 summon and 1500 per 10 summons. However, you can’t summon this for free daily! (can summon only girls)

– Gem Summon #3: Just like the previous summon, the Gem Summon #2, it follows the same principle except here you can only summon boys.

– Gold Summon: Another Gold Summon which lets you summon girls, and you can use your Gold Tickets for it. You can only summon 2 star or 3 star characters.

– Silver Summon: You can use your Silver tickets here to summon any hero between 1 and 3 stars.

Make sure that you save up Gems to summon 10 times at once because it is way better than spending 150 Gems per single summon. I believe that the chance is slightly increased for getting 3 star characters.

Summon Equipment for the characters

Just like you summon characters, you can also summon Equipment with your currency. This is super useful, but only after you have gathered the character which you wanted. Once you got all the 3 star heroes which you wanted on your team, you can use your Gems and tickets to summon gear!

However, you should make sure that you summon once gear for free every day because who knows – you might get some super good 3 star equipment! And besides, it is free!

Every team can have up to 5 characters, out of which one is the team leader. Each character will have a different Leader Skill so you should always check out which skill your characters have because some are better than others.

Always choose a leader with the skill that goes the best with the rest of the team because that way you will enhance everybody’s stats! Another thing you should do is always try to make your captain the strongest. For some reason I found this to work the best. Of course, all the characters that you use mainly on your team should be improved, but try focusing on the leader first.

Learn the counters and use them to your advantage

The characters each have an attribute, so you should try to use them in a way that they counter the enemy. You can see the character’s attribute in the top left corner of the character’s icon, and it should be one of these:

– Moe (Pink): it is strong against Neet and weak against Work.

– Neet (Blue): it is strong against Work and weak against Moe.

– Work (Green): it is strong against Moe and weak against Neet.

– Cat (Black) and Dog (Yellow) counter each other.

When you use an element which counter the enemy, your heroes will deal double damage! So even if you have slightly weaker characters in terms of stars, if their attack is relatively high, and they have the countering element, then you should swap and use them instead! Try that if you have a hard time against certain enemies.

Go for the glowing buildings

When fighting in the game’s campaign mode you should try to go for the glowing buildings. That is because there you will get some extra rewards! So make sure that you do it because it is better than farming the lower buildings!

I suggest that you also take a look at the Achievements because they are slightly harder to complete, and if you have a chance you should take it and complete the given task. The Daily Tasks are some quests which you should try to complete every single day, because they will reset the next one.

Try to complete the daily tasks every single day, and the weekly tasks every week. That will help you get plenty of Gems and soon enough you will be able to summon all the characters that you wanted!

Along with the daily and weekly rewards, you will also have some daily login rewards which are super simple to claim! All that you need to do is to make sure that you simply log in to the game every single day and claim them!

Do this even if you don’t really plan on playing the game that particular day because you will be able to claim tons of Gems, tickets and much more!

As the stages start getting tougher and tougher, so should your heroes. And for that, you will have quite a few things that you can do to improve them:

Your characters can equip 3 pieces of equipment: a head, an armor and a body item. As you shouldn’t focus on getting gears from the beginning unless you already have a couple of good 3 star heroes, these might come later on.

Either way, they will come – and you should make sure that you equip your characters with the best equipment, starting with your strongest heroes.

Level up your characters

You can level up your heroes by going to the Training menu, then tap on the character which you want to upgrade. There you will see a Level Up button. Tap on it and you will see that leveling up a character requires some EXP items – if you don’t have them, simply play and re-play stages until your characters level up!

Rank Up your heroes

Ranking up a character means upgrading its star rank. That can be done by using Upgrading Water, and quite a lot of it! Whenever you have a good character, make sure that you try to upgrade it as much as you can and try to save up the Upgrading Water because it’s not that easy to come by!

Star up the characters

These would be all of our Magic Burns 9 Times tips and tricks that we have for you right now! Do you know some more useful game tips and strategies? Feel free to share them with us down in the comments section below!