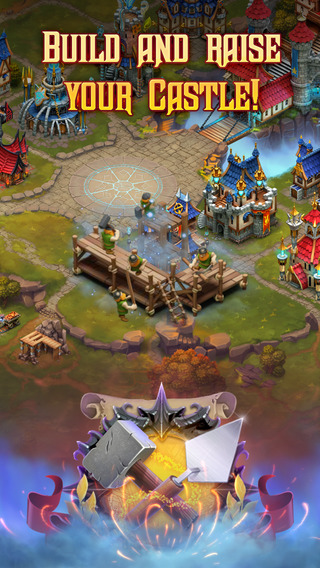 The kingdom of Argento needs your help! Build cities, develop your armies, create alliances, and crush all that oppose you in MageCraft: The War. MageCraft: The War is a city management game that tasks you with building a new empire from the ground up and defending it from other enemies! We’ll show you how to build the best kingdom with our MageCraft: The War cheats, tips and tricks strategy guide.

After you complete the tutorial, you’ll be given an introductory quest. You should follow these as they will point you in the general direction of what you should be focusing on first, and you should never have to worry about running out of resources if you do so.

There’s a box with a blue spiral at the bottom right corner of the castle screen. This box can be opened every 15 minutes, and what’s inside is random. Sometimes you’ll get resources, such as iron or lumber, and sometimes you might even get soldiers and the like! Always check back to see what you’ll get!

3. Protect any units you want to save in the Crypt!

You’ll build a crypt during the tutorial. This building is designated for safekeeping of your units. Units placed in here will be protected until they are removed from the crypt, but this also means they cannot defend your castle when you’re away. If you have any valuable units you want to save for a specific assault, be sure to store them here. Just be sure to leave some units out so that your castle isn’t completely vulnerable!

When you first start playing the game, you’ll be given a grace period where other players cannot attack you. Use this time to build up a reputable army! Your overall defense rating for when other players attack you is calculated by the number of units you have, how strong they are individually, and whatever other defense options you have available.

Scouts are a type of unit that you can recruit. Scouts are suited for espionage, which involves you sending them out to a location, whether it be a neutral enemy base or a player base. Depending on how the enemy base is set up, your scouts can gain valuable information that will greatly tip the scales in your favor when you do decide to engage the enemy. Remember though, other players are going to attempt this on you as well! In order to defend yourself against opposing spies, recruiting more Scouts is the key. Phantasms, Assassins, and the like will counter other scout unit types. The more active scouts you have, the less effective their espionage attempts will be.

An alliance is a group of players who have banded together to fight towards one goal. You can join one too, if you want! In fact, it might be a good idea to do so early on as alliance members can come to your aid if you’re attacked by other players.

7. Keep your upkeep in the green!

Upgrade your farms and build multiple ones if you need to. As the size of your army grows, the amount of food you’ll need does so as well. To keep up with the food demand, you need to keep your farms in tip-top shape. This also applies to your barracks, as you need to upgrade them in order to increase the amount of units you can train.

So, in all, you should follow the quests and keep your buildings upgraded. Build the new buildings when you can, and try to keep a good army up and prepared at all times. If you have any other suggestions or questions, leave a comment below!