You’ll have to collect, unlock new characters and build perfect teams in order to dominate the world, steal crates and have a ton of fun in this game. And since you can never say no to some extra help, our guide will definitely come in handy.

So let’s not waste any time and instead let’s check out below some Looney Tunes: World of Mayhem tips and tricks!

Steal those crates!
You can’t have a Looney Tunes themed game without something mischievous happening, right? Well, in this case, the thing you’ll be both fond of and hate is the ability to steal crates from other users.

These crates hold various goodies like money, XP points, character shards and more and they need time to be opened. They can be stolen – both by and from you – and are the foundation of this game. You should constantly attack other players and steal their crates, while doing your best to prevent that from happening to you.

When stealing crates from other players, always look for the highest rarity one. This is marked by the tier of the crate – but the easiest way to say if it’s indeed good is the amount of time required to open it: the more time it needs, the better it is. Also look at the combined power of the toons defending it and make sure you can come out victorious and with the box in your inventory.

When defending crates, you should always plan ahead a little bit: always have your best possible teams defending the best crates. Don’t mix and match and have 2 or 3 mediocre teams. Keep a super strong one that’s invincible working on your best crate and leave the others for the rest.

And if you lose a crate, you can still get it back: if you return before it opens, you can attack the player who stole it from you and if you can defeat them, you get your crate back.

Mix and match and make sure that you start with the base ingredients, then work your way up to lengthier tasks that reward you with more advanced training material.

In order to be able to send your characters out for more advanced materials and tasks, you will need to upgrade their buildings. So far it seems that all character types will bring you back the same types of resources, so there’s really no need to actually upgrade all buildings in the game, but instead focus on one and send the characters living there to do tasks over and over again.

Complete the daily missions
Each day, you will receive a set of daily missions that, once completed, will reward you with some extra goodies. These “extra goodies” are usually additional character shards – so make sure that you complete your daily set of missions each day!

Play and replay campaign battles
You can also stock up on the rewards that matter by replaying the single player missions in Marvin’s Invasion. That’s the perfect spot to rack up some more character shards, but also fill your inventory up with much needed potions to level up your characters or other items.

So make sure that you always consume all the energy that you have in Looney Tunes: World of Mayhem on completing the Invasion events over and over again.

Also look for any special events taking place in the game, as well as the Challenges – these are all great ways of gaining additional and usually rare loot.

Build those perfect teams!
The characters in this game are divided into regions and in most occasions, you will not be allowed to create a team mixing tunes from a region with toons from another.

This makes things a bit more challenging, by requiring you to focus on developing great teams in each region in order to be able to defend your crates and complete the missions. This also means that progress will be a bit slower, as focusing on turbo-boosting characters from just one region will not help that much in the long run.

Instead, you should prioritize regions in the order that they are unlocked and pick the top 4 characters in that region to focus on. This way, you will always have the best possible teams available and minimize resource loss by investing in characters that you will never use.

The golden rule of thumb in my opinion is to have at least a healer in your squad and at least one massive damage dealer. Tanks are useful, but not vital and if you have a tank that can really take a beating, you might skip on the healer.

Don’t forget that characters also get affinity bonuses from being paired up with their favorite characters – so always take that into account when planning your teams. Remember that any bonus counts so try to activate as many as possible.

Upgrading your characters
There are three ways for you to upgrade your toons, and we’re talking about each one below:

– Level up: this is the basic way of increasing their power (although by just a bit), getting a small boost to all the stats for each new level. You can only level up a character to your player’s level, after you reach level 10.

– Star up: This gives a massive boost in overall power, but it’s also the most difficult thing to get since you need character shards in order to star up a character. The good news is that any 1-star character can be turned into a 5-star one… eventually.

– Tune up: This is where you have to do most of your planning, as this method of upgrading your characters unlocks new skills and/or upgrades existing ones. This requires lots of items and resources, so you should always plan ahead and invest in your top characters first in order to make sure that they’re at maximum power at all times.

How to get more characters
Unlocking new characters – as well as starring up existing ones – is surely your main goal, and you have a few methods to try to achieve that.

You can unlock new characters by logging in daily and bagging the rewards, by completing the campaign and special event missions, by opening crates (especially the reatomizer crates) and from completing the daily goals.

How to win each battle in Looney Tunes: World of Mayhem
Now that you’ve done all the planning and setting up, you have to make sure that you always take into account some tips and tricks when it comes to actually winning the battles you’re going to take part in. Here they are:

– Make sure that you use your toons’ special skills at the perfect time. Sometimes it’s best to wait a bit before using them and not going for the special attacks first.

– It’s better to focus on taking down your enemies one at a time instead of trying to deal damage to all of them. Focus your attacks on the tank (if any) since most likely they will gain taunt and you’ll have to do it anyway. Otherwise – if no tank is present or if you have fast characters who can take out an opponent before the tank’s turn – focus on the highest damage character in your opponent’s team.

– Keep an eye on the special effects on both your team and your opponent. You rarely can do anything about them, but knowing that they’re active can help you better plan your moves. For example, if an opponent has counter, you might skip attacking them with a very low health toon or focus on a different one altogether.

That’s all folks! These are our Looney Tunes: World of Mayhem tips and tricks, but if you have some additional stuff to share, don’t hesitate to let us know by posting your comments below. 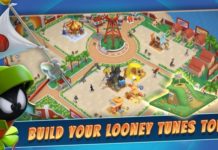 Looney Tunes: World of Mayhem Brings the Maestros of Mayhem to Mobile