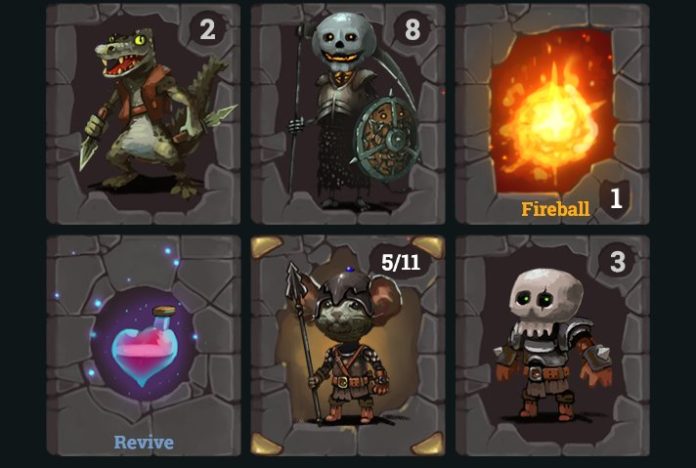 If you want to collect as much loot as possible and defeat many bosses in the game, our Look, Your Loot cheats and tips will definitely help you. We have a complete guide for beginners here – but more advanced players are invited to check it out as well in case we cover some strategies they haven’t thought about yet.

Look, Your Loot! is a brilliant card game / board game combination with deceptively simple mechanics. You are challenged to stay alive for as long as possible, defeating various monsters and bosses and collecting loot. With various characters to choose from and an extremely nice concept, this is a game you’ll want to play and be good at.

So let’s not waste any second and let’s check out some useful Look, Your Loot! tips and tricks below!

Always get the free booster
You get an extremely huge advantage from the free booster, which is randomly selected before starting a new game. You must watch an add to get it – but it’s really something I recommend doing as it helps a lot. Alternately, you can pay just 99 cents for the ad removal IAP and always get 1 booster for free.

However, don’t spend any coins on getting the paid boosters until you unlock all the characters in the game. Boosters are extremely expensive – and new characters even more so – meaning that you should plan your coins spending carefully.

What are the best characters in the game
There are currently 4 characters in the game, and fortunately my favorite is the one that you have unlocked by default: Knight. He has decent amount of hit points (10) and has a great super power that allows him to only lose 1 shield power if he attacks a character whose own power is lower than the shield’s.

My second favorite is the Rusty Paladin – very difficult to unlock as he costs 20,000 coins, but really good for an offensive game thanks to his steel boots (which allow him to walk over spikes without problems) and the fact that he turns shields into high-damage dealing lightnings

Some general tips & tricks for the game board:

– whenever spikes appear on the board, plan your moves carefully so that you remove them when they are pulled in.

– take your time when opening the chest, if you don’t have the key. Not only that you will not get a really important loot from it, but you will also lose health if you fail to open it.

– be careful with the fireballs: they cause damage to all enemies and obstacles, but also potions and shields. The best way to take advantage of the fireballs is to move around until they are in a position that will deal damage to the bosses and high health monsters nearby

– plan your moves carefully and try to think at least 2 moves ahead in order to make sure that you survive for longer. Get in a position where you can quickly heal or get a shield from after a difficult battle.

– take advantage of character’s super power. For example, my favorite character in the game: Knight, only loses 1 point of shield power when attacking a monster that has lower power than that of the shield. This offers a huge advantage in the game. Make sure you put your character’s power to good use!

– be careful with barrels if you are low on health as they can have a monster inside. It’s just the Thief that guarantees no monsters inside the barrels, but he’s not one of my recommended characters to play as.

These would be, for now, our Look, Your Loot! tips and tricks. If you have other strategies that work well when playing the game, let us know by posting a comment below.