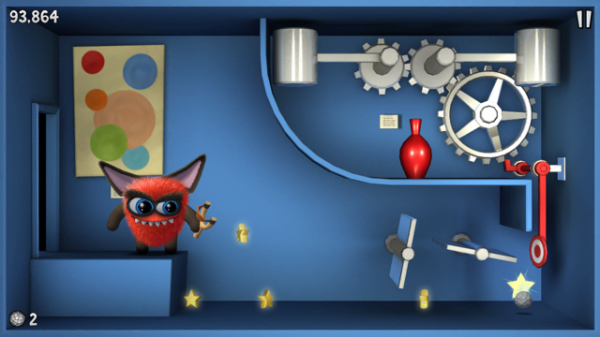 Lil Smasher is yet another physics based puzzle game now available on the App Store.

The game’s basic premise is actually more interesting than many other games, as players will have to control a small goblin who just loves to trash stuff with his slingshot.

A creature like that obviously couldn’t end up in a place where there’s nothing to break, so he ends up inside the Museum of Priceless Artifacts, where he’ll do everything it can to make these artifacts history.

If this intrigues you, you can get the game right now and start playing right away. If you want to be somewhat prepared for the task ahead, you can keep on reading for some useful Lil Smasher tips and tricks.

In Lil Smasher there are two scores that keep track of your overall progress in the game. The High Score actually has no purpose other than showing your friends your highest score. The Star Score, on the contrary, serves an actual purpose, as it keeps track of the stars you manage to collect during the game. Collecting all the stars in each stage will show that you have actually mastered that level, so make sure to complete a stage only after collecting all the stars if you want to see everything Lil Smasher has to offer.

Being a physics based puzzle game, there’s no real general tip that can make your life easier at all times during the game, with the exception of a very simple suggestion. Each and every stage doesn’t have an effective strategy that can be employed but a strict pattern that must be followed not only to complete stages but also to collect all stars. Keep track of all your moves during a stage and if you fail, try and remember where things might have gone wrong. Lil Smasher is a game that requires players to be observant at all times, so be observant as much as possible, as doing things randomly is probably not going to produce any result.