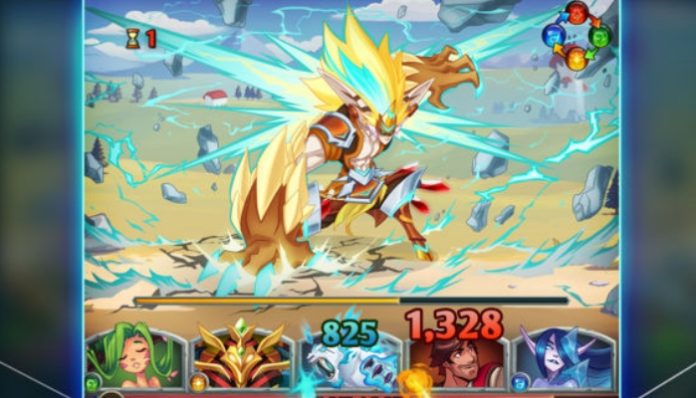 LightSlinger Heroes is a unique fusion of the “bubble shooter” puzzle and RPG genres. Sling magical orbs onto the field to match 3 orbs of the same colors to pop them and cast powerful spells!

Go for the chain breakers!

The magic orbs are affected by gravity. Sounds mundane, but did you know that you can actually use this to your advantage? Orbs usually spawn in certain formations. If you can, try to chip away at a part of the formation that’s “anchoring” another part.

Say one section of the formation is hanging on by a thread – if you can match the orbs there, that anchor will break and all of the orbs that aren’t attached to anything will automatically get matched.

As you can probably guess, this will rack up a bunch of hits for you and activate a ton of combos, so always try to aim for the chains that are holding masses of orbs together.

Take advantage of the elemental affinities!

If you’re a fan of the puzzle RPG genre, then you’re no stranger to the elemental affinities. Each hero belongs to a certain element, and they all trump each other. If you attack an enemy’s weakness, you’ll deal double damage. If you attack them with something they’re resistant to, you’ll only deal half damage.

As you can see, playing the elements is important to dominating your opponents! Fire beats wind, wind beats light, light beats water, and water beats fire. Take this into consideration when building your battle team!

One more thing you should keep in mind is that your battle team actually influences what types of orbs are most likely to show up in battle. Stronger heroes will have greater influences – for example, having a high level fire-type hero on your team will make most of your orbs fire. You can see the exact percentages when you’re selecting your battle team.

Take advantage of the combos!

As you learned in the tutorial, each element has a special combo ability that activates if you match 5 or more orbs of that color. Activating these abilities is the key to surviving the harder battles, so try to get in the habit of hitting at least one ability per turn.

Shield (water) and Damage Reflect (light) are probably the most important abilities to consider. Shield can ward off a considerable amount of damage when activated often.

Damage Reflect can turn the tables on your opponents and pile on the damage. As an added bonus Damage Reflect also reduces the amount of damage you take by 25%.

Remember that these two effects stack with each other, so when used in combination you can render yourself virtually invincible – enemies will destroy themselves trying to take your down!

To star up your heroes, you’ll need to find copies of them. Summoning additional copies of heroes is a lengthy experience, but you can also find heroes as drops from specific levels. The only downside is that these levels are Elite mode levels, which is the harder difficulty.

Before you can even attempt these levels, you’ll need to build up a decent team with what you’ve got. In the mean time, be sure to take advantage of the free summons.

That’s all for LightSlinger Heroes! If you’ve got any other tips or tricks to share, let us know in the comments below!