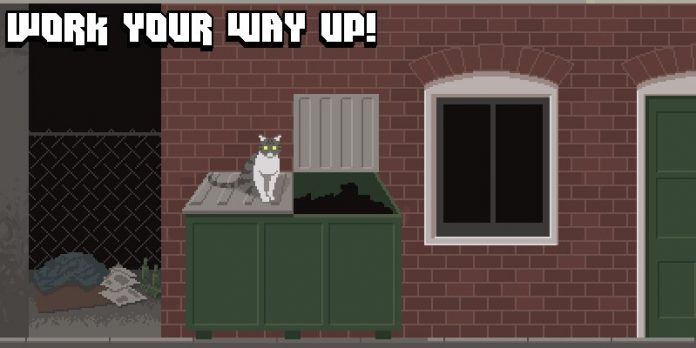 Life Simulator 2016 is an Android game developed by Frozen Vortex Games, a title that seems to be the equivalent of an “early access” game on PC – it’s still under development, but still playable and a lot of fun. But since Life Simulator is, just as the name suggests, pretty difficult and challenging, I decided to share with you a complete guide for the game, including some tips and tricks on what to do to get the most out of it. Our Life Simulator 2016 cheats and tips will share with you all the basics, as well as some more advanced strategies that will turn you into a super rich dude or dudette.

So without further ado, let’s check out some Life Simulator 2016 cheats and tips below!

1. The Trash is your friend
Especially early on, it is also your only source for food and drinks. Make sure that each day you tap the trash can until it’s empty. You will end up hoarding tons of food and drinks that will be extremely useful in the long run.

2. Only eat in the morning
Especially early on in the game, it seems that you don’t have to eat or drink too much. Sleeping is just enough for that. And maybe you can also grab something to eat at work, who knows? Either way, only eat early in the morning, before going to your job, if you need to. I rarely had to eat or drink during the early stages of the game, which made it even easier to hoard food and drinks.

3. Get your first job ASAP
The first job is litter picker and you can’t get hired for anything else early on. Get that job and constantly do it, day by day. You will slowly progress through jobs as you study and get better, but you have to start somewhere, even though it’s a really low paying job. Keep trying for other jobs though until you have the option unlocked. More on jobs a bit later.

4. Ads are your friends
And main source of money early on. An ad gives you 100 Pounds, while your initial job rewards you with just 15 Pounds per day. So watch the ads as soon as you have the chance – maybe even leave the game immediately after watching an ad and return after several minutes to watch a new one and hoard some money as well. You will have to study in order to get better and without the ads, the progress will be very low.

5. Study, study, study
Each day, you can study 5 classes – make sure you always study them all. If you are fast enough, you will get through a very nice schedule: sleep until just before 7, go to work, study five times, go to bed. Rinse and repeat. Rinse and repeat. Have in mind that you can study both the classes on top, as well as those at the bottom (I thought initially that the ones at the bottom are locked, but they are not). Try to focus on a few at a time, specifically on those that you think will help you in the future, for better jobs.

So.. what should you study most?

Each job in the game has more or less obvious requirements for applying. To become a Game Designer, for example, it is pretty obvious that you should know a bit about Computing, Physics and maybe Maths. It’s more of a guess work in most cases, but follow common sense and focus on the things that are immediately useful: English and Maths early on can’t get it wrong. Then, depending on the careers you want to follow, focus on ICT, Computing, Business and Physics. Either way, just make sure that you spend 5 classes per day – this is the only way to progress!

6. Work your way up slowly
Don’t try to get from Litter Picker to Stockborker too soon. Instead, climb up the ranks quickly: I got from my first job to Shopkeeper with relative easy, after a short while of playing the game, then got better and better jobs and better places to live in.

The nice thing about Life Simulator 2016 is that as you progress through the game, new gameplay options are unlocked. For example, as soon as you afford the Rundown apartment, you can access the bank where you can deposit money and collect interest (which you should do ASAP) and get a Gym membership, where you can work on your strength and popularity (also helping with other jobs). So keep on working on everything, get better at everything and you will soon become the superstar you dream of becoming.

These would be for now my Life Simulator 2016 tips and tricks. Do you have any other suggestions for fellow players? Let us know by sharing a comment below!