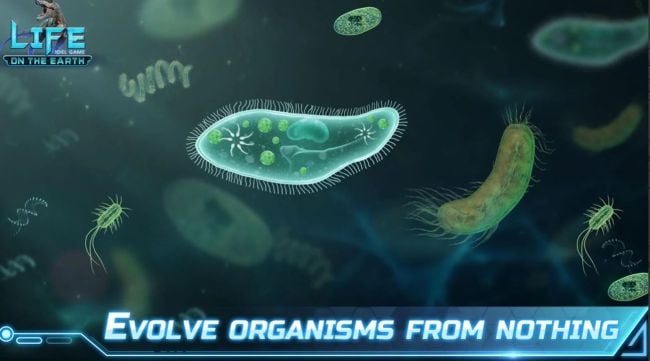 Today we will bring you in our latest article all of the Life on Earth tips and cheats to help you make more combinations, mutations and evolutions.

Starting with some of the smallest of life forms, you will be able to notice a lot of things – from how they move, to all the process needed for evolution to kick in and turn them into full-fledged creatures!

This game, while it is a beautiful idle game, it does require quite a little bit of time invested into getting everything started and if you didn’t manage to sort out how it works yet, then worry not – you came to the right place!

So therefore let’s not waste another second and dive right into the Life on the Earth tips and tricks right here below and teach you everything that we know about the game and how to get better at it!

The upgrades can be made by leveling up each one of the organisms that you unlock. That can be done by tapping on the up button on the right side of each one of the species. That will increase the amount of DNA you get from each unit.

While the upgrade cost is higher for the more advanced species (your latest unlocked) the DNA you get from popping bubbles there is also way higher! So try investing in making all the right upgrades to those first, then you can move on to the less leveled ones.

Level them up to something like 30, then move on to the next ones and upgrade them to the same level, and then keep doing this until you’ve leveled all of them as much as you could. It will take a while, but it’s definitely worth it!

For the very first Era, Precambrian, I’ve tried to unlock the last one there, Spriggina ASAP and then I’ve made quite a few upgrades to it, and then moved on to upgrading Noctiluca, Paramecium and Archaea finally. That way I always have the highest level one upgraded before the rest, so that there will be some DNA profit coming in!

Tap the bubbles and collect DNA

As you tap on the bubbles for each individual organism, there will be various amounts of DNA that you get from each one of them, according to the level that you’ve upgraded it to. So whenever you see a new blue DNA bubble, make sure that you pop it because it’s going to come in handy!

You can go back and forth between Eras to collect all the DNA that the organisms have produced, so try to do that if you are on a DNA-collecting-spree! You’re most likely not going to get a ton of it from the very first organisms, Archaea and Paramecium, but it will definitely add up and eventually you will be able to make upgrades!

Unlock the new species whenever it becomes available

Keep an eye on your chests

At the very top of your screen you will be able to notice your currently available chests. There are three slots for chests, and those are given as rewards for completing the tasks written below them!

I would suggest that you try to keep a close eye on your chests and all the tasks that you need to do in order to open them, because inside them there will be rewards such as cards or catalysts, which will help you evolve the organisms you currently have! So do your best to try and follow what the tasks are and open the chests whenever you can!

Tap on the orbs

There will sometimes be some Orbs which will fly right through your screen and will offer you DNA. I suggest that whenever you see one you tap on it immediately to claim all of the free DNA that they give. This is a super easy way to collect more DNA without actually keeping track of the DNA bubbles.

Make sure that whenever you can you claim them because there is good amounts of DNA points inside which will usually let you make a couple of level upgrades to the latest species you’ve unlocked. The amount of DNA in these orbs is directly proportional to how many species you unlocked and upgraded, so the more you progress through, the better the rewards!

Answer the quiz question and get 10x the rewards

These orbs will also have an option to give you 10 times the DNA shown if you answer one of the questions correctly. This option is available once every 2 minutes, so while you claim the rewards, I suggest that you try claiming them 10x even if you fail!

It’s better to try and even if you fail at least you tried – the rewards from the orbs will not reduce, and all that you gain is a chance to get 10x the rewards, so it is definitely worth it! Another tip that I have when it comes to answering these questions correctly is trying to remember what Era the species you have belong to – and if you ever have any questions regarding these, there is also Google!

In the upper right side of the screen you will notice the option to Accelerate. This will give you a question to answer, much like the mini-quiz you get every time you open an Orb, and if you answer correctly, the reward will be better!

But even so, if you don’t know the answer, the reward will be 3x Acceleration buff which speeds up the process of DNA creation for 3 minutes straight! So make sure that when the Acceleration is available, you take advantage of it to give you a good DNA boost.

Spin your lucky wheel every day

Right below the Accelerate menu there will be a Lucky Wheel which you can spin every day and receive some super useful rewards. Among these rewards there is Skip buffs (which allow you to fast forward the game), Diamonds, Catalysts and Chests! There are a few spins which you can do for free every day, but you have to wait a few minutes between spins!

Apart from the free spins, you can pay 5 Diamonds per spin, but I really suggest that you don’t waste your Diamonds for that because there are other things which you can get to make a better use of.

Learn from the mistakes

Whenever you answer one of the questions given to you by the game, you might answer wrong sometimes. When that happens what you should do is try to remember what the correct answer is (because after each wrong answer, the correct one will be highlighted) and use that the next time a question pops up!

Claim all the in game free rewards

There are quite a few free rewards which you can claim in game for doing various tasks, some easier and some more difficult! To claim them, there is a button on the right side underneath the Lucky Wheel called “Reward”. Head on there and you will have the following:

– Rebirth rewards: given to you upon achieving different levels on Rebirth.

– DNA/s rewards: given to you by achieving various milestones in DNA received per second.

– Online rewards: you can claim these by spending certain amounts of time in game – just remember! You need to claim the previous ones so that the timer can start counting upon the next reward, and then the next one and so on. So even if you stay in game for 5 hours, if you haven’t claimed the 1 minute reward, it will not count!

– Sign In rewards: these are rewards which you claim for simply logging in to the game, without having to do anything else! So just make sure that you claim them as soon as you log in game because on the 30th day the rewards are 11 Chests! So it’s definitely worth it.

– Medal rewards: these are similar to achievements – try to read them and complete them as you can!

– Diamond rewards: these rewards are given to you by spending Diamonds in game – they will reward you back with Diamonds, the more you spend!

I suggest that you try to claim as many as possible, and also read their requirements before so that you will know what to expect as rewards!

Work on the Evolution chain!

The Evolution can be found in the second tab on the bottom side, and if you want to reach the top of the Evolution chain, then you will have quite a lot of nodes to go through – you will start with the Algae, then you can upgrade Carbon Dioxide, Chloroplast, Mitotic Division!

From all of these, you can then move on to Photosynthesis and Vertebral. And that is when it starts getting fun! After you unlock Vertebral, you will unlock all the other interesting parts which will eventually create us! So make sure that you always add points into these whenever you have enough DNA!

Rebirth is available in the very first tab on the bottom side of the screen, and you will unlock that after you have completed Cambrian Era. There, you can choose the Rebirth option which will reset the level of all of your species, but give you instead boosts to DNA production per second and level up your Assistant!

I suggest that you go into Rebirth only when you see that the production is going super slow, otherwise wait it up because the more upgrades you make, the better the Rebirth rewards will be!

Add points to your Assistant

After you’ve performed Rebirth at least once you will receive points for adding to your Assistant. The Assistant is that little Wall-E lookalike which will give you some more bonuses and boosts. I suggest that first and foremost you add to Processor, then to Sensor and the rest is up to you – just make sure that you max out these two first!

These would be all of our Life on the Earth tips and tricks that we have for you right now! Do you know some more useful game tips or have a few more strategies to share with us? Leave them down in the comments section below!