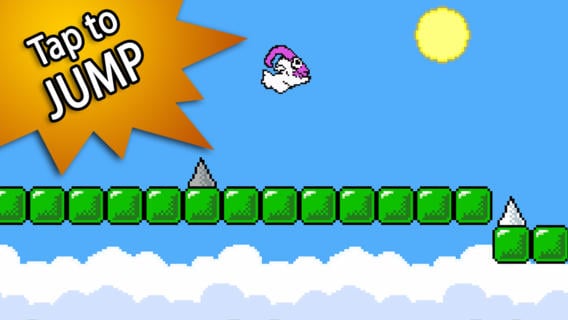 Are you ready to #LetitGoat? Let it Goat! is the self-appointed “new Flappy Bird,” so you know what that means – lots and lots of mistakes and retries! I hope your wits and patience are at tip top shape because you’re going to need it as you guide Mounty the Goat through a treacherous path full of spikes and zombies. Let us help your adventure with this Let it Goat! cheats, tips & tricks strategy guide.

Let it goat! Can’t hold him back anymore! Ahem. Okay, are you ready for the most authentic goat game ever? I hope so because now we’re going to share with you our Let it Goat! cheats, tips & tricks strategy guide.

On your run, you will often see obstacles set up like this.

There will be one spike or zombie hand in front of you, immediately after a drop off. Do not attempt to jump over them as these situations are more often than not built up to bait you into jumping right onto another spike just a little bit ahead, as pictured above. Instead, simply let Mounty fall off the ledge. Trust me; you’ll be safe! You’ll land right after the obstacle in question, and you’ll be on the ground ready to make another jump. This is the most common trap the game likes to throw at you, so be ready to react. Keep in mind though that there are some sections you’ll want to jump over completely; if the gap is tiny enough, try jumping over the whole thing.

During the beginning part, gems will almost always spawn at the edge of pits.

When they’re on the same side as you, wait until the last possible moment to jump. If they’re right after gap, jump earlier than normal to make sure you don’t miss it.

Watch the right side of the screen and think ahead!

Much like the very first tip I gave you, the game will constantly try to put you in situations where jumping will bring you to a swift death. Always watch the right side of the screen to see what’s coming up, and try to time you’re jumps until the very last moment. There have been countless times where I would see one spike coming, assume that the space ahead of it was clear, and jump way too early. Split seconds later I find out that there was another spike nearby and slam right into it. Jump with the utmost caution! Don’t fling Mounty all over the place, because once you’re in the air you are committed to your jump!

Watch out for this in the zombie section!

During the “graveyard” section, sometimes you’ll see a formation like this.

These parts are devilishly tricky. What you want to do is jump early enough so that Mounty hits the bottom of the top row of blocks, but not too early or else you’ll descend right into the zombie hand. If you jump too late, you’ll smack right into the side of the top block row. I don’t know how it was for others, but I saw this formation a lot whenever I got to the graveyard part so be aware of this!

Use bear when you need a hand!

Bear takes a single hit for you and more can be bought for 100 gems, which is kind of steep. If you decide to buy or use one for your current run, make sure you concentrate and do well.

Be patient and know that most of your deaths aren’t your fault!

Unlike Flappy Bird, Let it Goat gives you only half of the screen to watch for and only a couple of seconds to do so. This means that you’ll probably die a lot more than you did in Flappy Bird due to things you couldn’t have seen coming, and also thanks to Mounty’s float-y jump. This game is very trial and error, and you’re not going to get very far a lot of times. Keep at it though, because practice makes perfect!

That’s about as far as I can go. Let it Goat is mostly prediction and reflex timing, so success falls heavily upon the player’s own skill. Just keep in mind: you always do a little better every time, so don’t give up! If you have any suggestions or questions, leave a comment below. Good luck, you’re gonna need it!