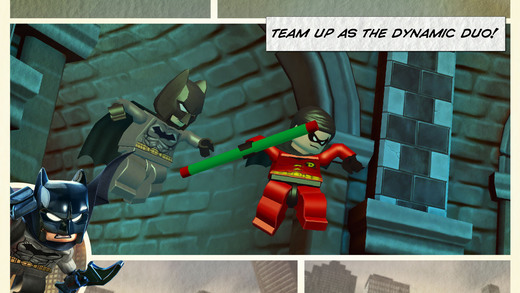 Earlier this week a new game starring Batman, Batman: Arkham Knight, has been released in all regions on consoles and PC but the game developed by Rocksteady isn’t the only Batman title launching on gaming devices this week.

Those who also play on consoles probably already know about Lego Batman: Beyond Gotham, the latest entry of the Lego Batman series released last year on a variety of formats. Starting today, even those who only play on iOS will be able to enjoy the game.

Lego Batman: Beyond Gotham isn’t simply a Batman game as it features a lot of locations and characters taken from the DC Comics Universe. Batman is still the star of the show, mostly, so expect to see plenty of special suits that will give several advantages during combat and exploration.

For the rest, Lego Batman: Beyond Gotham plays pretty much like the other Lego games with a few twists here and there. The addictive Lego gamelay experience combines platforming, puzzle solving and combat in such a clever way that it’s hard not to like it.

Lego Batman: Beyond Gotham is now available for purchase on the App Store for only $4.99. The game can be played on both iPhone and iPad.