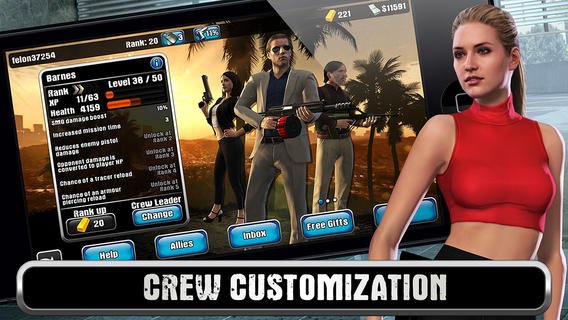 Lawless is an amazing action game created by Mobage in which you test your shooting skills as a top criminal, ensemble a gang and climb up the crime ladder. But we are here to talk Lawless cheats for the iPhone and iPad game, with a series of tips and tricks shared below to help you get the most of your missions, make sure that you get a three star rating in each of them and have the most fun by spending the least cash. So let’s get this going and let’s check out eh Lawless cheats: tips and tricks below for the iOS game with advice for both beginners as well as advanced players!

Shoot the easy way
Probably the easiest way to increase your score and aiming is to shoot at your enemies by tapping the bottom of the screen instead of trying to tap the enemies directly. A bottom tap is an instant hit, while otherwise you might have some trouble with moving or far away targets. It seems a bit less fun this way, but this is how to get the three star ratings in Lawless: shoot by tapping the bottom of the screen.

Keep a variety of guns
There are some missions that require you to use specific weapons, so make sure that you have them available. Don’t hurry to sell all your extra weapons and try to keep at least three of each type (for each crew member) at all times.

How to get better scores in the Lawless game
There are many factors that improve your score, but you should try to focus on the easy ones: shoot moving enemies and far away enemies for highest scores. Try to do kill streaks in order to multiply your score and as soon as you see an enemy highlighted in white, shoot him or her fast for an extra bonus. Also, you should always go for the route with more enemies because this automatically means greater scores. Finally, headshots give you more points but with bottom screen shooting, this doesn’t really depend on you.

How to get Rare and Epic weapons
These are the best weapons in the game as they do the most damage. However, as their names suggests, they are pretty hard to come by. You can get them during the gun rewards after completing missions, though for free – but don’t expect to have them raining on you! Alternately, you can purchase them from the shop when you have enough money. Also, you can increase the rarity of a weapon by ranking it up.

Tip to level up crew members fast
I have noticed that usually the crew leader gets the most XP points after completing a mission, so a good tip if you want to level all your crew members fast would be to replay the same mission over and over again, but change the crew leader. You will learn the positions of the enemies too and it will make it a breeze to get hot XP for your guys and girls.

Replay Missions
Basically, you should do this over and over again. It’s not that boring since the game is action packed and the rounds are really quick, and you will get more money, more XP and potentially more weapons to sell in order to get more money. Make sure you replay the missions that you didn’t get three stars on – especially after upgrading your weapons or getting a new crew member, because chances are you will be able to meet the requirements easily.

And these would be for now my tips and tricks for the Lawless game by Mobage. If you have other strategies that work well for you, make sure to share them with our readers below.