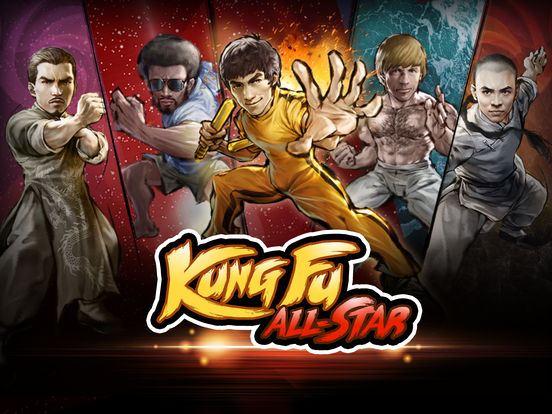 Welcome to Kung Fu All-Star, an over-the-top arcade style fighting game! Kung Fu All-Star is a loving tribute to kung fu movies from the 80’s, as you’ll be playing as lookalikes. Swiftly strike your enemies with the simple tap of a button, and unleash your special martial arts to clear out large waves of baddies! It’s fun and frantic and we’re here to help you beat all the bad guys with our Kung Fu All-Star cheats, tips and tricks strategy guide!

The one factor in whether or not you get all three stars on a level is if any of your characters were knocked out. Keep in mind that you can swap characters at any time, followed by a short cooldown. If one of your fighters is about to get knocked out, quickly swap him out for another fighter. Your fighters won’t recover any health or anything while they’re in reserve, but at least they’re safe from harm.

Fighters and enemies alike come in three different types – power, defense, and speed. Power beats defense, defense beats speed, and speed beats power. There is a fourth type called weapon. As the name implies, it’s any character with a weapon instead of their bare fists. Weapon-type characters cannot be countered by anything.

With all of this knowledge, always try to take advantage of your enemies’ weaknesses. You don’t really have to worry about the small fry, as they go down in a couple of hits from just about any fighter. When the bosses start to show up, look at what type they are and switch fighters accordingly. When you’re hitting the enemy’s weakness, you’re dealing 1.5x as much damage as normal! With all of this said, you should always try to have one of each type in your team.

3. Rank up your fighters!

Pulling new fighters isn’t as common in this game as it is in other hero fighters. For a majority of the start of the game, you’ll be using your main three fighters. To make sure their power levels are increasing, give them experience boosts and rank them up. In order to rank up your fighters, you’ll need to collect a certain amount of items that drop from certain levels. Thankfully, if you tap on the item you can see exactly what levels it drops in.

Auto battle unlocks once you complete the third stage. While it gets the job done at a pretty efficient pace, it’s kind of clunky. Auto battle will usually lock your character facing towards the closest enemy and they will continue to strike even when the enemy has been defeated. If you want to get things done faster, you should take control of your fighter yourself. Even during attacks, you can slide the movement stick to aim your attacks, making you much more flexible than auto battle.

That’s about it for Kung Fu All-Star. As long as you keep powering up your fighters and taking advantage of the types, you should be able to defeat all the baddies! If you have any other tips or tricks to share, let us know in the comments below!