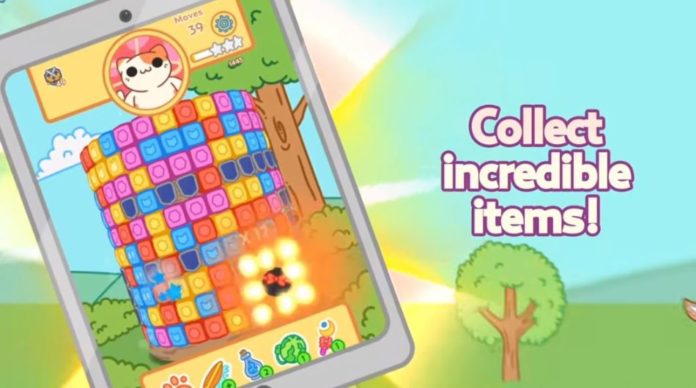 In today’s article we are going to go over all of KleptoCats Mystery Blast tips and cheats that we gathered so far and help you pass more of the game’s stages!

It’s much easier than you would guess, because this game offers you quite a lot of options and possibilities and if you combine that with the animated and pretty graphics that you will encounter in the game, you might find yourself glued to the game for hours (or even days)!

Since I am a lover of match three games, but also Japanese themed graphics and games, I have to say that this one combines both cute graphics with a good gameplay, so it’s pretty much got me hooked!

But enough with the praising – you came here to learn more about the game so let’s not waste another second and dive right into the KleptoCats Mystery Blast tips and tricks that we gathered so far!

Match, match and match some more!

The sole purpose of this game is to match as much as possible, but do that while also sticking to the game’s objectives. Try to make sure that you always match as many blocks as you can, because that will take them out of the way!

In the game it’s enough to have two blocks of the same color next to each other in order to have a match! I suggest that you tap on the blocks which have the most colors around, because those will give you better boosts and more points. Try looking for the 7+ block groups, because those will give the best boosts! The more blocks you have clumped together, the better the boost!

Either way no matter how you take it, just try to match as many blocks as you can while keeping an eye on the level requirements and trying to stay within the movements allowed! A level will be completed when you have reached the objective for that stage, or if you ran out of moves before completing it (which is quite a bummer)!

Tap and activate your special blocks

Because as I mentioned earlier, the stage will end once you have either completed the objective or ran out of moves, if you are trying to complete the objective soon, then you should try to tap on all the special blocks before you put the last blocks towards completing the level requirements.

I suggest doing this, because if you complete the stage while still having special blocks on the board, they will not open and will not give you any bonuses. Try to always activate them because otherwise you will have made them for no particular reason!

That should be a good reason for you to make as many special blocks as possible, and use them too, so you can conserve some moves! I am pretty sure that by doing this you will complete the stage much easier.

Rotate the board around

This game is quite unlike any other that I have played, in the sense that you can actually rotate your board around (since it’s somewhat of a cylindrical tower) and see the blocks from different perspectives (quite literally).

If you are quite literally stuck on your side of the tower, then all you have to do is tap, hold and drag the tower to the left or right side and that way you can see new rows of blocks and start matching there!

Tap on the flying cat on a skateboard (say what?)

Every now and then you will spot on your screen a random cat flying on a skateboard! This is an option which will appear several times a day, so make sure that if you spot it out you don’t miss tapping on it!

By tapping on the flying kitten you will be able to watch a short advertisement and claim some free rewards, which usually are Coins (the game’s premium currency)! Definitely be on the lookout for those strange flying fluff balls because you will not regret it, especially once you have collected quite a lot of Coins!

Claim free rewards from the Portal

In the main interface of the game you will see that on the right side you will have an option called “Gift”. There you can claim daily three free gifts (which, again, are mostly the premium currency Coins but you can also get infinite lives for a while or other useful bonuses) by watching an advertisement!

Since this can be done three times a day, I definitely suggest that you watch the three ads and claim this gift three times, because you will not regret it! I always prefer to watch and claim these gifts all at once, so all three one after the other because that way I get them out of the way and benefit from the rewards!

I definitely suggest that you do this, especially if you are at higher stages which are more difficult, because if you get infinitely lives for 30 minutes or so you can then lose the stages and not lose lives over this – so you can keep trying again and again!

Use the Power Ups and pass the stages easier!

I suggest that you always use the power ups if you are about 1 or 2 moves away from completing the stage’s objective because otherwise, you cannot really be sure that you will even progress that far in the later stages of the game!

I definitely consider that you should use the boosts and power ups if you consider it necessary, because that way you will complete the stage much easier (and save one of your lives in the process)!

Collect stars in a jar!

For every star that you collect in a stage, you will add that up into a jar which you can then open (once you collected 30 stars) to collect some various rewards! I suggest that you always try to collect as many stars as possible, because you will see that they are going to be definitely worth it!

My little tip: I always prefer to finish the stages, even from the very early levels, with no matter how many stars, but just finish them (even if i complete them with 1 or 2 stars at level 10 for example). If I do this, I can then later come back and replay that level and try to get 3 stars!

In my opinion it’s better to try to pass the stages in any way that you can, because you will then unlock more boosts (eventually, even if not right after) and it’s way easier to reach 3* in the early levels rather than in level 500 something!

Another tip here: Once you are finally able to claim the rewards from collecting 30 stars, make sure that you watch an ad to get more bonus rewards! This will be greatly beneficial, and it’s not like you collect 30 stars every second, so the boost will be a great addition!

Keep an eye on the Ninja Dogs

All while playing, you will sometimes have some ninja dogs on the stage! They will keep advancing one block at a time per match that you make, so make sure that you always keep them in check by smashing them with some blocks!

In order to defeat the Ninja Dogs you will have to match blocks above them so that they will get smashed! If you keep them in check, you will be able to continue your levels as you play, but once a Ninja Dog reaches the top, it’s game over! Make sure that you always keep them under control and try to not allow them to reach the top.

They can finish a level in a matter of just several moves, so make sure that you always rotate the block tower around and spot if there are any naughty ninja dogs climbing around!

If you happen to be just a couple of blocks away from completing a level, but you ran out of moves, then you need to know that it might not be all that difficult! You can choose to spend your Coins to purchase 5 extra moves, so if you have 45 Coins that you don’t mind spending, you can do this! However, do it only at the difficult high level stages, because otherwise it’s not really worth it (to do it at level 15 for example).

Create special blocks and match them up!

You can create special blocks by matching multiple blocks of the same color, and that will result in you having some better chances at passing that stage with less moves! I suggest that you try to always match as many blocks as you can, and also try to match the special blocks among themselves to create some super special blocks that wipe out everything!

These would be all of our KleptoCats Mystery Blast tips and tricks that we have for you right now! Do you know some more useful game tips and tricks? Leave them down in the comments section below to be shared with all the players!

KleptoCats Mystery Blast Cheats: Tips & Guide to Pass All Stages in the Game