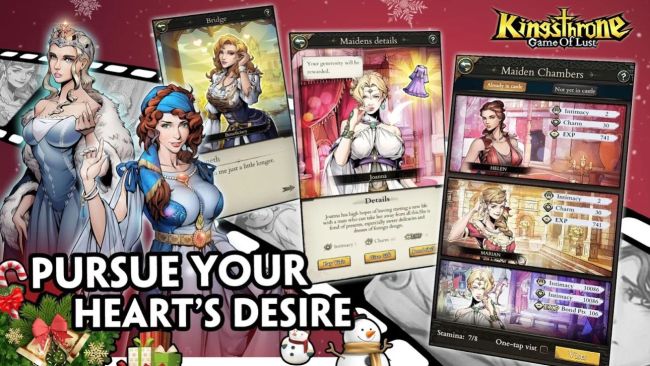 The Maidens have plenty of roles in the game, from increasing your men’s stats, to making children for you and even keeping you entertained! But enough with the formalities now, because if you want to learn how to get more, and learn everything there is to know about them, you came to the right place!

So let’s start with the very first thing on our King’s Throne: Game of Lust Maidens guide:

What are Maidens / Ladies?

If you already know the answer to this, then you can skip on to the next point, but if you want to learn a little bit more about them, then let me brief you in on the basics. Sooner or later (depending on your pace) you will encounter a couple of Maidens who will join you at the castle.

This will happen relatively early on in the game, so if you haven’t noticed yet, just keep playing. The very first Maiden you will encounter is Marian, then Margarate then Isabella. Once they have joined you, you can tap on the small arrow pointing right to see which of the male heroes the Maidens have a bond with.

When they are bonded (when you have both the male and female character who bond together) you will see which stats the Maidens will boost. That’s why it is important to keep upgrading constantly all the Maidens, as well as all the heroes (the ones that you use at least firstly).

How to Get More Maidens

There are a few ways to get more maidens, so let me list all the possible ways down below so that you can know what to focus on:

– You can obtain more Maidens by constantly doing Processions and encountering them enough times, so that they will join you in the Castle.

– You can obtain more Maidens by progressing through the Campaign Battles (Tap on Kingdom and win as many battles as you can to progress through).

– Some Maidens are available when you become a VIP player, so that means spending a few bucks on the game and purchasing the packs which offer Maidens.

– Sometimes there are in game events which can reward you with some Maidens.

If you are a f2p player, then the Processions is the main way that you will obtain most of your Maidens. So let me tell you how you can get there, and how it works!

You will find the Processions menu when you are headed into the Castle -> Tap on the left side on the horse cart with the text “Processions” -> and there you will have 3 Processions available. These refill over time, so try to use them before you have 3/3 because then the timer will stop and if you really want the Maidens, then that time could be used refilling the Procession time!

When you tap on the yellow button “Processions” then it will take you to a random location from the ones there, which will give you a random encounter! It could be a Maiden, or any other encounter.

You can also notice the Luck meter on top – I suggest that you always try to keep it at something around 70-80 at least, because that will increase your chances of encountering Maidens!

You can refill the Luck meter by using Gems (+10 Luck), Gold (+2 Luck) or Grain (+2 Luck). I suggest that you use Gold and Grains first, because these are free resources which can be gathered easily!

Try to do all the processions on high luck, because even if it is going to take time,you will eventually get all the Maidens you wanted – just keep at it.

As you might expect, sometimes the Maidens might give birth to babies. The babies’ quality will correlate with the Intimacy level that you and said Maiden have, so the higher, the better!

To boost the intimacy drastically you can choose the lady that you want to visit instead of going for the “Random Visit” option which takes you to a random maiden. Another way to boost the intimacy is by giving various gifts to the maidens! Those can be bought in the store or from event shops!

How to Get Heroic Maidens

There are also certain Maidens which are different from the others, in the sense that they are giving some better stats and they can also act as heroes! They are way more difficult to obtain than the normal ones also, which makes them a great asset. These are called the Heroic Maidens.

You can find them in the menu located on the scroll in the right side of the screen. In order to obtain a Heroic Maiden you will need to collect 10 special spears, which can be purchased with real currency by being a premium player, or by collecting them from special in game events.

Here I am going to give you a list with all the Maidens currently available in the game and how you can obtain them too!

– Katerina (can be encountered in Processions – Herb Garden)

– Anastasia (can be encountered in Processions – Sitting Room)

– Mavia (can be encountered in Processions – Solarium)

– Amala (can be encountered in Processions – Solarium)

– Yolanda (can be encountered in Processions – Coach House)

– Gwyneth (can be encountered in Processions – Bridge)

– Eleanor (can be encountered in Processions – Bridge)

These would be our Maidens / Ladies in King’s Throne: Game of Lust, complete with the Maidens guide for you to learn more about them! Don’t forget to check out our game guide to see all the tips and tricks that we have about the game, so that you can get stronger faster!