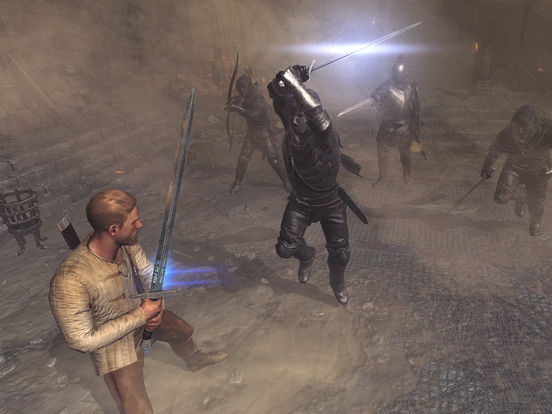 From nothing comes a king. King Arthur: Legend of the Sword is an action fighting game based on the upcoming film of the same name. Follow the early days of Arthur’s life as he trains with his group to become powerful enough to wield Excalibur. Vortigern’s henchmen are already planning to attack, so you’ll need to be ready to fend them off. We’ve got some tips for you right here in our King Arthur: Legend of the Sword cheats, tips and tricks strategy guide!

1. Get the counter enhancer moves!

In the upgrades list, there are two upgrade at the bottom of the list that improve your counter maneuvers. The first is Counter Throw which is performed by countering an opponent then swiping downwards on them. After the initial counter hit, Arthur will slam them into the ground, dealing massive damage and incapacitating them for a couple of seconds. This maneuver is a great way to focus on one enemy while still dishing out powerful blows to any other enemy that tries to get a little too close for comfort. The second move, Counter Drop Kick, is performed by countering and then swiping upwards. Drop Kick deals about the same damage as throw, but it sends them flying away from you. Use Drop Kick if you want to give yourself some breathing room.

Either way, both moves are incredibly helpful for keeping enemies under control. At least one of these moves should be your first upgrade purchase!

2. Use the defense crush moves!

The last three “normal” moves that you can purchase all share one quality: they break through an unarmed opponent’s defensive stance.

They all essentially do the same thing so you’ll need one of these moves. You’re taught during the tutorial that your regular overhead attack (swiping down) can break through an opponent’s guard. This move comes out a little slow, so if you want to combo with a little more finesse you can resort to using one of these moves. Just be sure you connect into the finishing hit of these moves as soon as possible, because if you attack a guarding opponent with too many normal hits they will automatically counterattack!

3. Keep all enemies in your view!

The camera will do its best to keep all active enemies within eye shot of Arthur, but sometimes they will wiggle out of view. It’s helpful to try to keep all enemies within view so you can react properly. This is especially important if you’re fighting enemies like the Chargers or Archers, as they can take pot shots on you without you even noticing. You won’t be able to react if you don’t see them or that red warning indicator!

Because most moves in this game require swiping as inputs, there will be moments where you’ll attack the wrong enemy. You can avoid this by keeping enemies apart to the best of your ability. It’s not going to be in your favor all of the time of course but you can move enemies around a bit using your moves. The more space between enemies, the less chance of accidental target switching.

Another thing to keep in mind is proximity to the front of the camera. Generally speaking, the further you are away from the camera’s view point, the smaller the enemies will get. This will make targeting even more trickier and you’ll be bound to make some mistakes. Be careful! Try to keep the action right up front in the center.

5. Use Excalibur as soon as it’s ready!

Upon activation of Excalibur, you’ll enter a mini game where you slice down all foes with the power of the legendary sword. No matter how much health enemies have, they will go down in one hit from Excalibur! Use Excalibur as soon as it’s ready for big points and to clear out the entire field. You’re even required to use it to be able to damage the final boss. There’s no point in holding onto it; unleash the ancient sword’s power!

That’s all for King Arthur: Legend of the Sword! If you have any other tips or tricks to share, let us know in the comments below!