Kick-Flight, the high-flying acrobatic multiplayer action game is finally here! Ride the winds and fight to collect precious gems in ferocious 4-on-4 team battles! Utilizing your imbued shoes, take to the skies with the tap of the screen and boost your way to victory playing as one of the many unique “kickers”!

How to win each game mode?

Scramble is the basic mode of Kick-Flight, and it is the only mode available to you when you first start the game. In Scramble, both teams aim to grab hold of the crystals on the field. There are a total of 50 crystals, and the team that has the most when time runs out is the winner.

At the beginning of a match, boost around to try to collect as many crystals as you can. Early on, you can ignore the enemy Kickers and just go for the crystals. Littered around the map are giant orbs called Guardians, and you can deposit your crystals in them. If an enemy Kicker gets too close to your Guardian, it will fire upon them causing big damage.

If you are knocked out, all the crystals you are carrying will reset back to where you collected them. As such, it is much safer to store crystals in the Guardian when you have amassed a bunch of them. Do not be too greedy – the more crystals you are holding, the slower your Kicker will fly.

Do note however that your Guardians are not invincible. They can be attacked by the enemy team, and if they take enough damage, they will start dropping crystals. A viable strategy if the enemy team has more crystals than you is to team up and take down one of their Guardians. Remember that the Guardians hit hard, so it is best to tackle it together with a high-health Kicker to absorb the blasts.

Two flags of both team colors will spawn somewhere on the field. Bringing the flag that matches your team’s color to your base will score your team a point, and the first team to three points wins the match.

What is interesting here is that you can pick up both flags, regardless of color. This means that you can purposely grab the enemy team’s flag and play keep-away with it, buying time for your team to run your flag to home base. Note that you cannot hold onto a flag forever; flags will automatically return to their default position after a set amount of time even if you are holding it.

You can only hold one flag at a time. Much like the crystals, holding a flag will slow your down considerably, so you need backup from your teammates. If you take a hard knockdown or are knocked out, you will drop the flag on the spot, so be careful and watch your health.

The general strategy here is to split your team into two’s. Two Kickers run your flag back to base, while the other two try to harass the enemy team and prevent them from capturing their own flag.

A ball will appear will appear on the map. Teams must grab the ball and bring it back to their goal, but each goal is defended by a Guardian. The Guardian must be fought and destroyed before the goal opens up, allowing your team to score, provided you still have the ball. The team with the most points at the end wins!

This mode is sort of like Flag Flight, but with even less objectives on the field, meaning that team fights are going to a plenty in this mode. As expected, the player with the ball is considerably slower, so you must rely on your teammates to help protect you. Move as a team to your goal, fending off any opponents that try to intercept, then take down the Guardian together.

The Guardian is as beefy as it is in Scramble, so be prepared for a fight. As always, let your tank-type Kicker get its attention while the team attacks it. Once a Guardian is destroyed, the goal will remain open for a little while, then afterwards it will respawn, requiring you to destroy it again.

The trick here is to focus on taking out the enemy Kickers at the start. Most of them will try to grab the ball and run away, but a simple knock back move will make them drop the ball on the spot. Instead of focusing on the ball, just take them out one by one and if one of them tries to run away, stun them.

Once they are defeated and waiting to respawn, that is when you make your move towards your Guardian. Fight the Guardian but have some Kickers fend off the incoming enemy team. You have to balance defense with offense here, as too much of either will result in no progress.

The minimap is an invaluable tool during every mode, and you should constantly be referring to it. The minimap will show the location of objectives, and it will also show where your teammates and enemies are. Before rushing into a potentially bad situation, glance over at the minimap and plan out your route.

There are 12 Kickers for you to play with an experiment with, and they are categorized into classes. Each classes excels at one specific thing, so we recommend trying all the Kickers to find the right one for you. The four Kicker classes are:

When you queue up for a match, the game will try to pair you up with compatible classes so that you do not have too much of one class. Still though, it is helpful to try out all the Kickers to know exactly how they work.

In addition to their stats, Kickers have three skills: a special skill, a Kicker Skill, and a passive ability. The Kicker skill is a Kicker’s signature move, and it usually compliments their playstyle. The special skill is an ultimate move that can only be used once charged up all the way, and it is extremely powerful! The passive ability activates under certain circumstances or it is always active.

Knowing what your skills do is the key to victory. We will use the starting character, Tsubame, as an example. He is a Speed type Kicker, which makes him excellent for chasing down objectives or picking off weakened stragglers. His Kicker skill, Sonic Rush, lets him dash at an opponent and break their guard.

His ultimate special skill, Burst Glide, kicks up a mighty whirlwind around him. His speed is temporarily increased and any opponent who gets too close to him is knocked upward, which is perfect for his chaos-creating playstyle.

Every Kicker in the game has a set of unique challenges that are tailored to them. You can access them by going to the Kicker menu and examining the Kicker you want to train with. You will see a Training meter with a Challenges button.

If you want to get better with a specific Kicker, we highly recommend undertaking these challenges. Not only do you get some training in with the Kicker, but you also get nice rewards for completing challenges!

Discs are tiny chips that contain powerful entities. You can bring up to four with you into a battle, and there are six types of Discs:

Discs also have attack and health stats on them, and they tally up to your Kicker’s total stats. Higher level Discs increase your stats more!

Discs also have attributes to them, denoted by their color. Fire Discs are red, water Discs are blue, and wind Discs are green. The first Disc in your deck determines your Kicker’s attribute, and each attribute is strong and weak against another. To help you remember the chart, just think of the colors.

One more thing: each Kicker in the game has “Disc Compatibility”. You can use any Disc you like, but if you use a Disc that is compatible with your Kicker, the Discs will activate much quicker than usual. Using Tsubame once again as an example, he is compatible with MOVE Discs – as expected – but he is slow with TRAP and HEAL discs, making support a no-go with him.

Now that you know the game modes, picked your favorite Kicker, and set the best suited Discs, you are ready to take to the skies! More often than not you will be faced with a battle in Kick-Flight, and you must adapt to the situation to come out on top.

As a general rule, if you see an opponent and expect a fight, always go for the first strike. Getting the drop on an enemy is more important than you think, as it allows you to follow-up with your ATK Discs to bring on the pain. Do not forget to use your Kicker skill!

If you are playing the objective and you would rather evade, be sure to keep a look out. If you see a line pointing towards you of the opposite color, that means an enemy is targeting you and will most likely perform a dash attack towards you. Get ready to evade and boost!

If you swipe in any direction, you will perform a dodge boost in that direction. If you do this right as an attack is about to hit you, you will perform a “perfect evade”. You will know if you did it if you flash blue. In this state, your recovery time is much quicker, allowing you to counter attack right away. If you have any knock back attacks, use it to disable your opponent, and you should have enough time to get away.

Remember to help with the objective! While it is helpful to take out as many enemy Kickers as possible, your team may need your help with capturing the objective. Keep an eye on the mini map, keep your HP up, support your team, and you should be able to win.

And with that concludes our guide on Kick-Flight! If you have any other tips, tricks or strategies to share, let us know in the comments below! 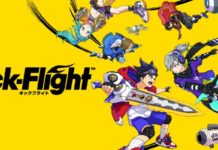