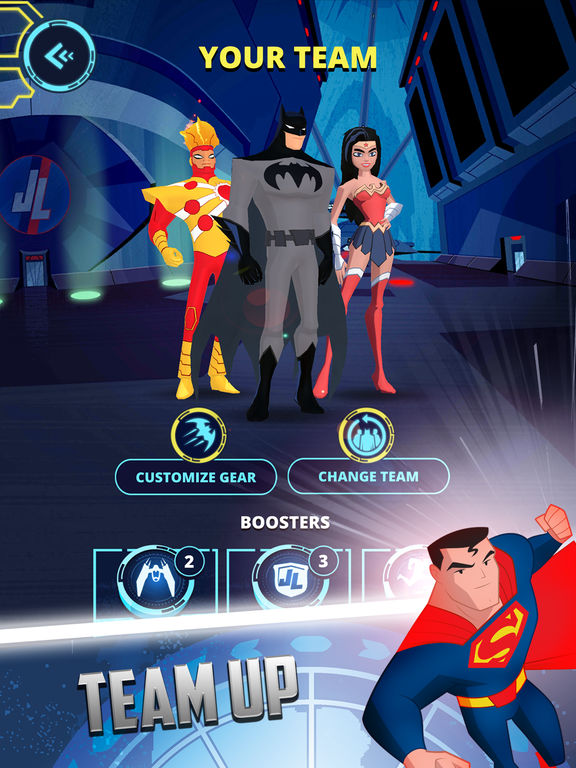 1. Use the Magnetic gear!

Most heroes can choose between three different weapons to equip during a run. The second weapon that Batman and Wonder Woman unlock are magnetic versions of their original weapons. You may have noticed that tossing a batarang or using the lasso of truth will snag items in front of you. Well, the magnetized versions of the weapons will drag items from the other lanes with them! It’s a great way to collect a lot of coins and power ups.

Firestorm has a unique attribute to his weapon. Token Fusion allows him to shoot out a projectile in front like usual, but if it collides with an obstacle it’ll turn it into a coin! If you really want to bring in the dough, pick Firestorm and use token fusion on every obstacle you come across.

Each superhero has a super ability that can be activated once charged. Collecting the green lightning bolts during a run will charge it faster. Unleash it by tapping the button at the bottom of the screen! Most of them are pretty useful, acting as “dash” power ups which essentially let you run through a portion of the level while invincible. Wonder Woman’s ability lets her take to the skies. While in the air, coins are every where and you can freely move Wonder Woman by dragging the screen. Level objectives also spawn up here for easy pickings, like bombs or targets. Out of the starting three heroes, we like Wonder Woman’s the best.

4. Use a hero for matching costume pieces!

To unlock a new costume for one of your heroes, you’ll need to collect five costume pieces that are scattered around the levels. If you want to unlock a costume for a specific hero, make sure you’re actively playing as that hero. We’ve noticed that the costume pieces that do appear have a good chance of corresponding to the hero we’re playing as, so increase the odds in your favor!

5. Go for the super charge!

Try to grab the green lightning bolts whenever you see them. Ultimately we think it’s better to use your superpower as soon as you can, because it helps you get more coins as opposed to just going after the coins normally. As we mentioned, these super powers often let you move freely all over the track without fear of crashing into anything, just like Wonder Woman’s flight. Lots of easy coins to grab this way, so always try to charge your super power!

That’s all for Justice League Action Run. If you have any other tips or tricks to share, let us know in the comments below!