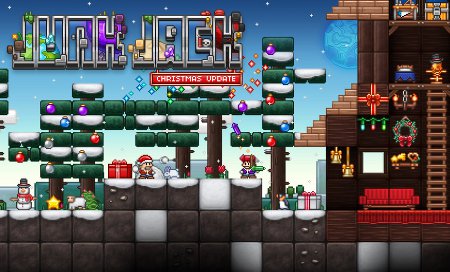 With a surprising and unexpected move, Pixbits has released a new Christmas themed update for the sidescrolling game Junk Jack X. Did you really believe this was a surprising move? I hope not.

Junk Jack X joins the countless other games who have been getting Christmas themed new contens like The Simpsons: Tapped Out, just to make an exapmple.

Among the new contents introduced in the Junk Jack X new update is a new world called Cryo. Found in the new world are around 40 new enemy types with different loot and new music tracks created by Bright Primate.

As if all this wasn’t enough, three new unique armor and weapon sets will be included, together with four new statues and much, much more. If this doesn’t get you in the Christmas mood, I don’t know what does.

The new update also introduces a lot of tweaks and bug fixes, as well as a new weather system and other gameplay changes. You can learn more about the update by going here.

Junk Jack X is a 2D sandbox adventure not too different from other games of the same genre. The title created by Pixbits offers quite a lot of freedom in exploration. The experience is quite engaging and you will soon find yourself mining gems, building equipment and discover new planets.

Junk Jack X is available on the App Store. The new update is now available for download.