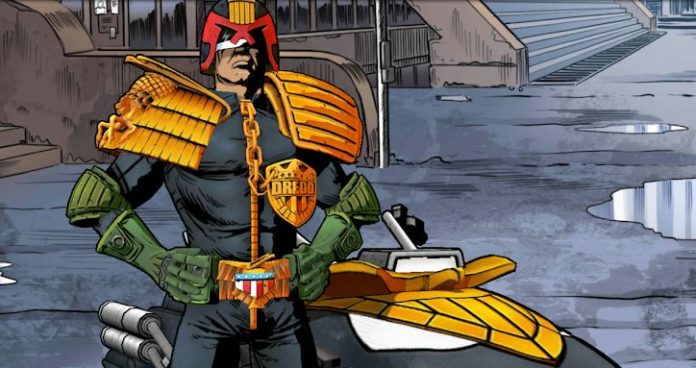 Welcome to Mega-City One, rookie. Home to over 130 million people, this city is rampant with crime, and that is where you come in! Judge Dredd: Crime Files is a turn-based card RPG where you help Judge Dredd bring the law to the city streets in a new adventure. With plots written and artwork done by the original creators, this game is a must play for any Judge Dredd fan.

Welcome to Mega-City One!

As Judge Dredd, you will patrol the streets of Mega-City One on the lookout for perpetrators. As you battle your way through the main story crime files, you will unravel a much more sinister plot that is going on behind the dark alleys of Mega-City One.

The main progression route is this: you play through the crime files to experience the story, then you will have to go on patrols when you come across a level that requires clues to unlock.

Get your daily goodies and complete the roster!

Every day, you are given a set of five tasks to complete. This is listed under your Daily Roster. You will need to do things like arrest a number of perps, complete code alerts, play a crime file, and so forth. Completing all five roster missions will reward you with a free card pack, so try to do them every day!

There are also freebies for you to collect in the shop. Once every day, you can get a free stack of a random action card. This is helpful for leveling up your cards. In addition to that, you can also get a free “Credits & Kit” gift every four hours, which contains consumables like repair packs and interrogation actions.

Taking down creeps is a fairly straightforward process, but Judge Dredd’s user interface may leave you a little confused at times, so we will go over all the key things to remember.

Dredd himself has these elements as well, shown at the bottom of the screen. Keeping track of your health and turn count is important to understanding the flow of battle!

Pay attention to the turn count!

Turn count is most important mechanic of the battle system that you need to remember. Every action card you use has a turn count, and knowing when to use which cards is the key to battle.

Say for example the enemy has a 3-turn count, and you use a 2-turn action card. You will perform your action before the enemy can attack, and you will also have one more turn before they retaliate. In that time you can use the Dodge card given to you in the tutorial to avoid damage.

This may seem obvious but working around the turn count is absolutely necessary if you are trying to play as efficient as possible, which is required if you want all three stars on the level.

Dredd can take eight action cards with him into battle. You will shuffle through these randomly as you fight with them, so it is important that you build a balanced deck. By this we mean to have an even layout of turn count cards.

As an example, you do not want to load your deck with nothing but cards with high turn counts. If you take a lot of cards with turn counts higher than 3, you will most likely take a hit every time you try to attack.

This may not seem like much, but the damage will add up and you will soon find yourself in a pinch. Try to have an equal balance between low count cards and high count so that you can attack safely and wind up big finishers to do lots of damage.

It’s all about secondary effects!

The tutorial teaches you that many of the action cards in Dredd’s arsenal have auxiliary effects. These effects range from helpful buffs for yourself, or negative status ailments for enemies. They have a chance to trigger upon using the card, and taking advantage of these effects is important.

When you are putting a deck together, do not just look at the damage – take a look at the secondary effect as well, if there is one. As one example, the Cross card deals 20 damage, but it also has a 15% chance to interrupt an enemy’s turn count, delaying their turn.

There are lots of effects to discover, and keeping them in mind when building your deck will put you ahead of the game.

Remember to use your support and special cards!

Support cards are consumable, meaning you have to refill them from the shop. Support cards can restore your health and armor, or inflict a status ailment upon your enemies. These cards can save your life in a bind, but just remember not to wait to the last minute to use them as they also have turn counts.

Whenever you play an action card, you will generate special meter. When the special meter is full, you can play your special card which usually deals a tremendous amount of damage and inflicts some kind of ailment on your enemies. Special cards can turn the tide of battle, so make sure they count!

When to execute or arrest?

If you knock out a perp using melee attacks or your Stun Gun, they will be knocked out once they reach zero health. When a perp is knocked out, they will get a high turn count, around 12 or so, before they regenerate a bit of health and act again.

If all perps are knocked out, then the battle is considered won. You can also use the “Arrest” action card on a perp with low enough health, and they will be considered stunned indefinitely. Bringing in perps alive rewards you with more experience points but less credits.

However, if you finish out a perp with a lethal weapon such as the “Standard Rounds” action card, the perp will be considered killed and they are permanently removed from combat. Executing perps rewards you with more credits but less experience points.

So, when should you do either option? The game does not really punish you if you decide to do one option more than the other, so it is ultimately up to you and what you need at the time. Want to level up faster? Keep perps alive, but if need some credits go ahead and take them out.

There is one exception to this, and this is during the patrols. During a patrol battle, you must keep AT LEAST one perp alive in order to interrogate them to get a clue. If you take out all of the perps you will have no shot at getting any clues, rendering the patrol a little pointless.

You will still get the after battle rewards like new cards, experience, and credits, but you will miss out on the clues. Be careful not to use lethal force when dealing the last perp in a group!

Come back for the stars!

Do not worry about getting all of the stars on the first run through the level. In fact, it might even be a little too hard at that point, so it is much easier to come back with upgraded cards to make the battles smoother.

The final star – the one where you must finish the level without taking too much armor and health damage – is particularly challenging, as there will be many times where damage will just be unavoidable. When you have access to more damage mitigating cards, this challenge will be more manageable.

And that’s all for our Judge Dredd: Crime Files guide. If you have any other tips or tricks for keeping the streets clean, let us know in the comments below!