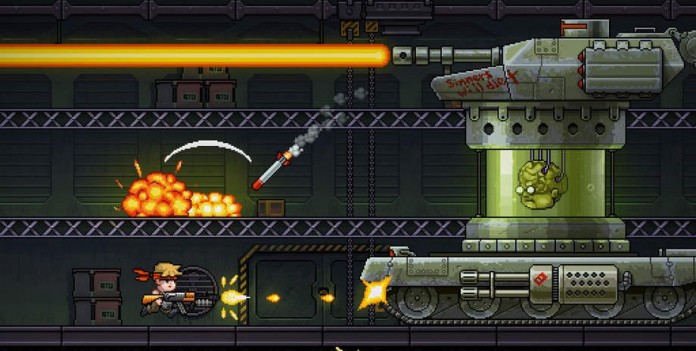 Joan Mad Run is a surprisingly fun and awesome retro running game with many weapons, tough enemies and just as much blood as you need in such a game. It’s also extremely challenging and sometimes frustrating, which means that you’ll be playing it over and over again! And I am here to help you get as far as possible or at least make your play sessions as fun as possible by sharing some basic Joan Mad Run tips and cheats that will help you get going.

Well, we can only hope to get cheats in the future because right now I have none, but will update in case this changes. Until then, let’s check out below some Joan Mad Run tips and tricks to help you keep going!

1. Avoid the difficult enemies
Although this doesn’t sound like the thing Rambo would do, it might keep you safe, so remember that it’s best to avoid the enemies that are difficult instead of risking it all to get hit. There are some (like the shield guy) that you can do nothing against anyway, but others can be destroyed, even though it’s easier to just leave them alone. Practice, then practice some more and work your way up slowly: start by avoiding them and when you get more comfortable with the controls, start trying to take them out as well for the extra points.

2. The Shield guy
I hate that guy and probably you do too! The thing is that he does run towards you even if you go up or down after the exclamation mark announcing him comes, so when you see that exclamation mark it’s best to just go in an area you will be able to quickly move away from. Unless you have a power-up, in which case you’re most likely immune to his attack.

3. Unlock new weapons
Getting new weapons is extremely important, especially for the later stages of the game, when things get a bit more complicated and your basic weapons no longer work as well. Find a balance between unlocking new weapons and upgrading them, because upgrading is equally important, especially for the more advanced weapons: when you upgrade them, they will get different boosts in their performance, and they’re all extremely useful. Personally, I would go for a weapon buy or upgrade first, then a power-up purchase (see below) and so on. Keep things balanced!

4. Buy power-ups
There are two types of power-ups you can purchase: three that you can get at the start of the game which will only be with you for that particular run and those that upgrade power-ups you can collect during your run. I would personally suggest focusing on improving the ones you can collect during your run first because in the long run, that will be more helpful. Once you are an expert at the game and you have a bunch of weapons and upgrades, you can invest now and then in the starting power-ups, specifically the Score Booster.

When it comes to the in-game powerups, I would personally upgrade them in this order: Bloodlust, UlUltra Boost, Coin Magnet, Multipluer and Endless Ammo. It is true that infinite ammo sounds great, but you have no control on when that power-up will appear and this means that it’s the least helpful because it might come when you have no real threats around you.

5. Practice, practice, practice
Your skill is what matters the most when it comes to Joan Mad Run, so play over and over again and you will get better at this. It’s fun and it’s the right way to do it!

Do you have other tips and tricks for fellow Joan Mad Run players? Let us know by commenting below!