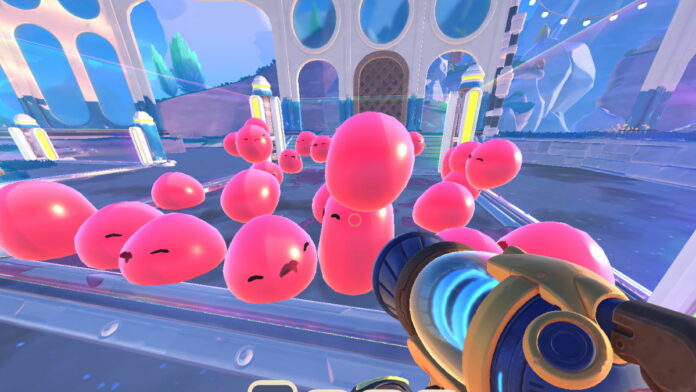 Slime Rancher 2 is the sequel to the wiggling and jiggling farming adventure game from 2017. The game runs on the Unity engine, and the sequel utilizes Unity’s new High Definition Render Pipeline to handle the graphics. The result is that Slime Rancher 2 looks better than the first game, but at a higher performance cost. Today, we’re here to answer the question: Is Slime Rancher 2 performance on PC good?

With that knowledge in tow, we booted up Slime Rancher 2 and set the master graphics quality to high, which sets all advanced graphics settings to their highest setting. For reference, this gameplay was tested on a PC with an Nvidia GTX 1080 Ti GPU, and an i7-8086K processor, alongside a 144hz monitor.

During our preliminary test, we were getting frames somewhere in the 70-90 FPS (Frames per second) range, with V-Sync both on and off. Though we never experienced any significant hiccuping, our FPS never stabilized, always jumping around in that range.

Slime Rancher 2 seems to be a much more demanding game than the first one, which is to be expected since they’re using new graphics technology with Unity’s new tools.

We then changed the master graphics quality all the way to the lowest, and the game was able to hit a full 144 FPS. When we were out adventuring and running into large groups of slimes, it would drop a bit, but never significantly. The game ran very smoother, but it was lacking in graphical fidelity.

So, overall, it seems like performance for the PC version of Slime Rancher 2 is all over the place, but leaning more towards the poor side. Many people were reporting poor performance in general, but as with any other PC game, your mileage may vary depending on your specs.

It’s important to keep in mind that Slime Rancher 2 is in early access, so the game is probably not fully optimized yet. Expect updates to increase performance and stability later down the road.

We hope that answers questions about Slime Rancher 2’s PC performance. If you own the game on PC, please comment below how the game runs for you, and your specs would also be very helpful!