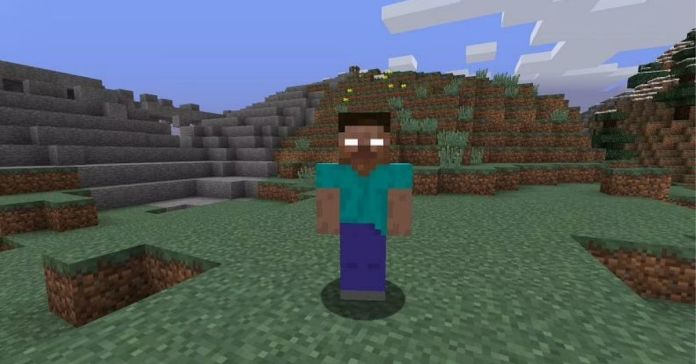 In this famous cube game, the player can meet a variety of mobs. Some will spawn in certain locations, and some need to be summoned. However, all this does not concern Herobrine, and in this guide, we will tell you about him.

Herobrine first appeared in 2010 in Creepy-Paste on the game’s official website. There the player told how he saw a Mob or NPC with human textures but with white, empty eyes. He also began to notice atypical structures like ideal pyramids in the ocean or trees with completely cut leaves. And also there were a few more users who saw Herobrine and all received a letter from a user with the same nickname. The hero also found out that one of the developers of the game, namely Notch, had a brother with the same name.

But this is all just a story. Notch denied the existence of Herobrine in the game and also said that he never had a brother.

RELATED: How to Get a Potion of Slow Falling in Minecraft

Then he appeared a couple of times on the streams of the players, which of course was a fake. And so until today, he became one of the Minecraft memes.

And although this character is not in the original version of the game, you can add him through the Herobrine Mod. This mod adds Herobrine himself, which will scare you, attack, and write to you in the chat.

So we can say that Herobrine exists in the Minecraft universe, but not in the game, including the Bedrock Edition.

Is Herobrine in Minecraft Bedrock Edition?