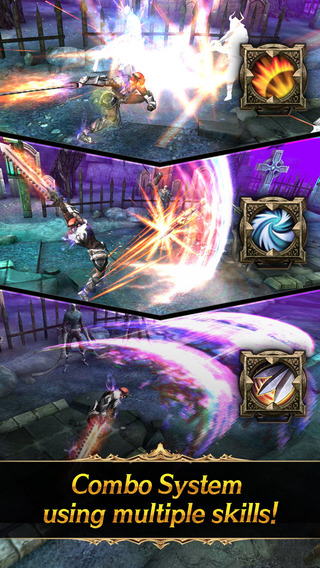 The Dark King Maggedron has emerged from the depths of the underworld! The peace that the Armross Empire once knew is now in danger. Join the army and take the fight to the underworld to stop Maggedron from plunging the world into darkness! Iron Knights is a hack and slash action RPG that has you battling through hordes of enemies and massive bosses to get to the Dark King himself. We’ll help you hack through the bad guys with our Iron Knights cheats, tips and trick strategy guide.

1. Use skills to get out of harm’s way in a pinch!

Whenever you use an active skill, your character is completely invincible for the duration of the skill animation. This trick is particularly useful when you know a big attack is coming, like the ones that the bosses use. This also helps you employ a sort of hit-and-run tactic, where if you don’t want to be too close to a dangerous enemy you can run in, use all of your skills to do lots of damage without fearing any retaliation, then run out and wait for your cooldowns to finish. Use this strategy for particularly hard enemies!

Talents are passive abilities. You can equip up to three of them initially, and you unlock more slots and levels 50, 70, and 90. The ones I recommend at the beginning Sharp Blade (Increased attack and explosion resist), Persistent Life (Increased HP and freeze resist), and Steel Armor (Increased defense and thunder resist). These three should toughen you up to last for a while. Be sure to upgrade them as you go.

3. Keep your equipment updated and upgraded!

Remember that you’ll earn new equipment by completing stages, fulfilling quests, and leveling up. Always make sure to check you’re wearing the strongest items you have, and remember that you can also fuse old items into new ones, increasing their power! Do note that success may or may not be guaranteed depending on the rank of the item you’re fusing compared to the base item. As a general rule, the lower ranked the item you’re using to fuse compared to the base item, the lower the chance of fusion success. Fuse wisely!

You are allowed to bring four units with you into stages. Your frontline units (top row) will fight with you first. If they are defeated, your backup units come in. Units are very powerful allies so make sure they’re prepared to fight with you. You can fuse them together just like weapons, so if you find a favorite unit power them up by fusing extra units into them. They also have their own equipment slots, so be sure to give them good weapons.

All of your swords will have some element on them or no element at all. Every enemy type also has an innate element. It is important to note that each element is weak to another. If you’re having trouble with a particular boss, try using a weapon that beats out that boss’ element. The chart goes like this: water beats fire, fire beats grass, grass beats lightning, and lightning beats water. During combat you can check this chart right next to your status bar. Handy!

6. Be sure to collect all the quest rewards!

Whenever you clear a stage, you unlock the “reclear” rewards for that stage. They’re not added to your inventory automatically though, you have to manually go into the stage select screen, look for any stage that has a green ! next to it, select it, and then collect your reclear reward. These rewards are usually pretty good, and they refresh if you clear the level again, so be sure to collect them. This also goes for the Hero Quests and Daily Quests. You can see these two on the main menu; hero quests are one time only quests that you will complete naturally as you progress through the game. Daily quests refresh every day, and they’re good for extra gold and supplies. Like the reclear rewards, these quests do not automatically complete even if you have fulfilled the quest; you must go into the quests menu and manually collect the rewards. If you really want to rake in the gold, try to knock off every quest on the daily list!

When you embark on a stage, you can opt to bring a friend with you. At any time during the stage, you can summon that friend’s hero to come fight alongside you. They only stick around for 15 seconds though, and you can only summon them once per stage, so make sure it counts! Don’t worry if no one you know plays this game, as you can add random people in the Find Friends section of the Friends menu. As an added bonus every time you summon a friend or you yourself is summoned, both players receive valuable horns to buy items!

8. Use auto-battle for easy grinding!

If you want to clear a stage again for some more rewards, make sure to use the auto-battle button. This sets your hero on autopilot, where he’ll automatically advance towards the end of the stage while attacking anything in sight. The only drawback to this is that your hero will not use any active skills, but that shouldn’t matter if you’re already powerful enough to wipe out the enemies with just basic attacks.

That should be all of the basics you need to fight against the Dark King and his minion army. Continue to fight and don’t stop slashing! If you have any other questions or suggestions, leave us a comment. Have fun and good luck! 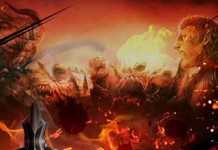 Persona 5 Scramble: The Phantom Strikers English Version May Release In...