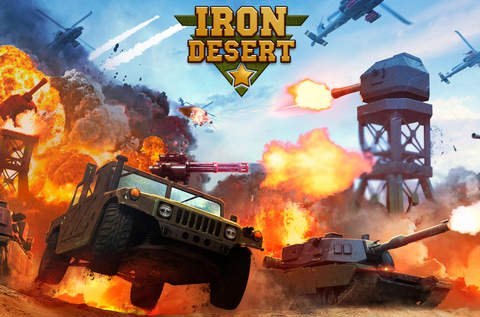 My.com, the creators of the popular Jungle Heat – which also happens to be one of my favorite strategy games on iOS – have launched a similar product, Iron Desert. And even though the new game doesn’t rise to the standards of JH, it’s still pretty addictive and a nice game to play with or against your friends. I am here to share with you a complete set of Iron Desert cheats and tips and help you create the perfect strategy for an impenetrable base and an amazing attack.

So if you’re finding it difficult to progress through the game, check out Touch Tap Play’s Iron Desert tips and cheats below and your game should improve!

– There is just one area (at the bottom) where troops can be placed to attack, so you should create your entire base design in such a way that the area is defended. Place your Command Center to the upper part of the base to make it the most difficult building to get to, and place in front of it decoy buildings (like mines and other structures). Ideally, you will place your Watchtowers and other defensive towers in such a way that there’s a row of buildings between them and incoming troops. This way you will have an easier shot at taking out the incoming forces.

– Focus on upgrading the resource buildings first, then the silos and only afterwards the defensive towers. Make sure that you have a steady flow of resources and a high level Command Center before focusing on actually building up your base. Early on, there’s not much to do anyway, so you really need to get those resources and kickstart your base.

– Upgrade your Drill Ground as much as possible. The more troops you can send into battle, the better your chances of winning. So build up your Drill Grounds first to get access to a ton of troops!

– Repair the damaged structures on your base. Even though the Squad Hall is extremely important, it will be some time before you will afford getting it, so start with the low cost structures. The order in which I would recommend unlocking them is: Radar (to help with the missions), Laboratory and Hangar. And, of course, as soon as you have the chance, repair the Squad Hall.

– Join a squad. If you have ever played a Clash of Clans like game before, you know just how important the clans or squads or alliances really are. The same stands for this game, so make sure that as soon as you have the coins for this, you join a squad for the added benefits.

– Learn to tell the levels of towers by looking at them. Based on the defensive buildings you have, learn what levels they are so that when you go to battle against a human opponent, you can easily tell what level their buildings are. Your goal is to attack the easiest possible targets in order to get the most out of the battles.

– I haven’t been able to find a perfect strategy for attacking in Iron Desert, since you are limited to where you can place your troops, but you can try to look for breaches in the defenses. If you can place your troops in a place where they avoid the range of the towers, do so. If you can take out the mines first, do so. And don’t forget to use your artillery wisely, because it can really make the difference in a fight.

– Don’t forget to upgrade your artillery. It’s called Zeus and it’s right there near the Drill Ground. The first few upgrades are extremely cheap, and you should keep upgrading for the added bonus of extra energy. The more you have before the start of ta battle, the better!

Unfortunately, there’s not a lot in terms of strategy when it comes to Iron Desert as you have very little control over the troops and their placement, but with these tips and tricks you will hopefully do a little better in the game.

If you have other Iron Desert tips and cheats to share with us, let us know by commenting below!

Iron Desert Cheats: Tips & Strategy for the Perfect Base