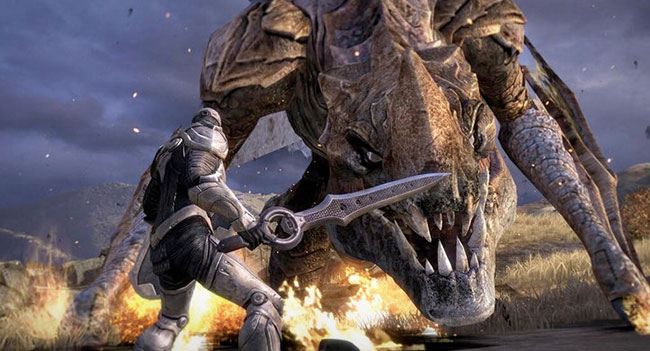 Infinity Blade III is a truly excellent game that will throw multiple challenges at your during the course of the adventure.

These challenges aren’t too hard to overcome with a little patience but they may still frustrate gamers new to the series or the genre in general. This is way we will sharing with you some small tips that will definitely help you on your journey.

During the game you will have plenty of combos at your disposal to deal with enemies of all sorts. Knowing how much damage they deal will definitely help you in defeating even the toughest of enemies. The following three combos are quite damaging and you’d best memorize them if you’re having some trouble in the game.

During the course of the game you’ll surely end up mastering quite a few weapons and armors. Even though they may be your favorite, it’s always a good thing to unequip mastered equipment pieces so that more can be mastered. Selling mastered equipment will also help your balance quite a bit.

The best offense is a good defense, especially in Infinity Blade III for a couple of reasons. First, because you don’t want to be damaged. Second, because attacking after having parried a few hits of an enemy’s combo will actually increase the damage you deal to them. Always wait for the enemy to attack, parry and dodge and after a few attacks, it’s your turn to unleash your best combos.

If a solid strategy is not enough to succeed, you can always resort to grinding. If you’re having some problems tolerating the tedium that comes with it, you can grind in an effective way through a simple method. Once you have defeated the larger enemy, choose to go up on the elevator to fight the Dark Knight. Loosing against him will make you go to the beginning of the castle, without losing items, gold or experience. Doing it more than once will power you up quite a bit as well making you earn good amounts of money.

Earning some extra Battle Chips is not hard at all, if you know what you’re doing. Make sure to unlock the Battle Challenges skill as soon as you can, so that you will be getting extra objectives to complete during Titan battles, objectives that will make you earn extra chips. Completing some of the game’s achievements will make you earn chips as well as competing. in Trials, ClashMobs, and Aegis Tournaments