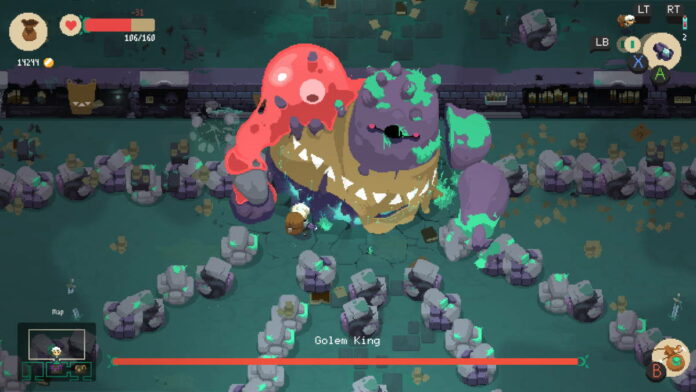 A little village known as Rynoka lies nestled within an excavation site. Rynoka is home to many daring adventurers who use the nearby “Gates” – portals to uncharted worlds – as a way to make a living by gathering valuable treasure.

One such adventurer, Will, is about to set out on a life changing journey. He wants to be more than just a simple shopkeeper… he wants to be a hero. And only you have the power to help him!

Moonlighter is an action adventure roguelite game where players embark on epic journeys in search of grand loot. Will can take gates to randomly generated worlds where he’ll face off with ferocious enemies and giant bosses all in the name of epic loot!

Any items that Will collects can be brought back to Rynoka to be sold. Will still needs to maintain and run his shop, after all! Use the money you earn back to acquire and craft new gear, which grants Will new abilities.

Every world holds new surprises, so you have to be prepared for anything. Bring your best gear and find the perfect playstyle for you – with many different combat abilities and skills, you can customize Will to your liking.

Moonlighter was originally released on PC and consoles two years ago, and now it’s finally here on mobile. Deemed not quite a port but almost like a new game by the developers, the mobile version features a new interface, touch-friendly controls, and rebalanced enemies and abilities.

Moonlighter is available now on the iOS App Store.