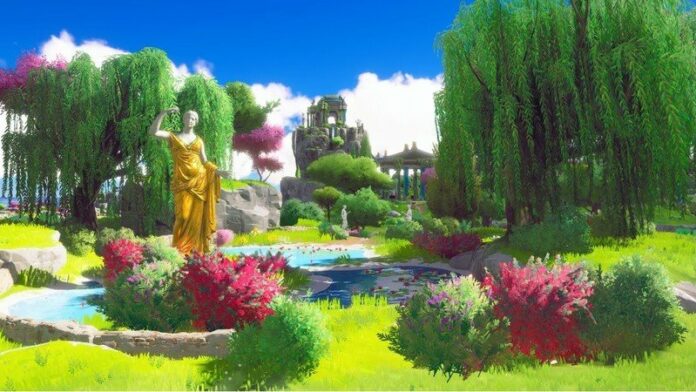 Immortals Fenyx Rising features a lot of main story quests, but also many side quests that let players not only obtain some nice rewards but also learn more about the Golden Isle and its inhabitants.

The Valley of the Eternal Spring is the area where Aphrodite is located, and Fenyx has to work hard to restore her to her original form and her immense beauty. But it is also an area that features a few side quests that will reward you with materials and all sorts of useful items. And if you do not want to seek out these side quests yourself, you have come to right place: here’s how to find and complete all of the Valley of Eternal Spring sidequests in Immortals Fenyx Rising.

This quest is among those few you will probably be able to complete late in the game, as it requires you to collect all 4 Nike Fragments scattered all over the Golden Isle. Once all four have been collected, head to the Hall of the Gods and follow the marker to reach a cave. Inside, you will find the last color for the Embrace Armor.

The A Trojan Gift quest can be found in an area close to the Navigation Challenge 5, which is located close to the border with the Gates of Tartatos. To complete the quest, you will have to find a few items and place them inside the circular object. The purple stone is found close to the circular object, the second piece is to the northwest, inside a tenth, the third is behind a barrier that requires you to pull a lever and light three pyres with your arrows ( the final pyre is inside the building.

Once you have placed all items in the correct place, you will have to fight a Cyclops. Defeat him to complete the sidequest and unlock Navigational Challenge 5.

The Crazy Cupid Love quest is found inside Aphrodite’s Palace, near Fresco Challenge 5. To complete this quest, you have to place a cube on the pedestal behind the building nearby, get to the top of a statue of a woman and shoot an arrow at the target. Once completed, you will be able to get a lot of different mushrooms by checking out the other statue nearby.

The Flipping Houses quest can be found in a ruined village close to Odysseus Challenge 3. Once inside the village, Zeus will start narrating, and all you will have to do is smash some stuff around until the God of Thunder is satisfied enough to continue his story. The actual reward for this quest are the ingredients you can find inside the ruined houses.

The Ocean’s Offspring quest is located in the south of the Valley of Eternal Spring, right in the middle of the area to the southwest of the Observatory and to the east of Eros’ Haven. To complete the quest, all you have to do is to follow the statues, and the quest marker, right into the ocean. Dive in, activate the terminal and return to the shore to enter a new area with a statue and a lot of materials. Interact with the statue to complete the quest.