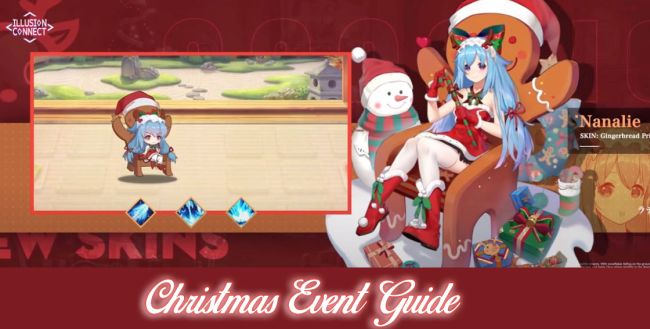 The Christmas and New Year event, actually called Illusion Connect New Year Market is the latest event running in Illusion Connect. In this event, you have a lot of features, ranging from event stages to limited summons, and event shops.

I have to admit, this event is a lot more giving than the previous ones, since you can claim 2 skins for free. That’s right, with patience, players can claim the Nanalie and Kiraya time-limited skins, all for simply completing a couple of in-game tasks.

During the time of this event, you will be able to access a limited-time banner for Nefir, a new SSR Sorcerer unit, that looks really great at first glance. Other than that, you will be able to claim the free Christmas Duke Kiraya & Gingerbread Princess Nanalie skins, a lot of Diamonds, and plenty more amazing rewards.

Since this article is an in-depth guide to the Illusion Connect Christmas event, there’s quite a lot to go over. So, follow the links below to read the part you’re most interested in.

As per usual, players have to clear stages, collect the rewards, and donate them to the Snowman in New Year Exchange booth, in order to claim Chocolate Coins and redeem various prizes. The event has two parts – one which consists of claiming prized and clearing stages for rewards (in phase 1), and one which consists of supporting their favorite characters (in phase 2).

Don’t worry though, I will explain everything about both parts. So, keep on reading and I’ll let you know everything, starting with the items.

In this event there are quite a few items, but it’s easy to keep track of them because, as I mentioned, the event consists of two main parts.

How to get Fireworks:

Fireworks are the Firework Combo, Peace Firecracker, and Sparkler items. These items are time-limited, and can only be obtained before the event. As you might have noticed already, days before the event started you could claim Sparklers from the normal stages/collapsed stages, and they counted as “Event” items. However, now you can only obtain them from the event stages.

These are used to support your favorite artists in the Dream Song Battle, the New Year Event which opens on December 31st. In a way, they are similar to the items used in the Tourney event.

– You can get Firework Combo by completing the event stages.
– They can only be obtained before the event – so you can only get them until December 30th (or 31st maybe, but I am not 100% sure). Either way, I suggest you start collecting them now!

How to get Holiday Bells, Christmas Stockings and Handheld Lanterns:

These items pretty much fulfill the same role, and they are the main event loot. They will be used in the New Year Exchange booth, by donating them to the snowman on the left side of the screen. (Again, similar to how it was in the Tourney event)

How to get Chocolate Coins:

Chocolate Coins are the main currency of the event, and you will spend them in the New Year Exchange Boots. You obtain them mainly by donating your Holiday Bells, Christmas Stockings, and Handheld Lanterns to the snowman. They are valid only during the event time, and you can use them to purchase pretty neat time-limited items.

– You can get Chocolate Coins by donating Holiday Bells, Christmas Stockings, and Handheld Lanterns to the snowman. The amount you get is as follows:

How to get Pinecone:

Since Pinecones are your main ways of getting event loot, you will want to collect as many as possible. They are the Stamina used for this event, and they refill over time. However, you should not rely on that alone, because there are other ways to get them too. For example, you could use your own Stamina and farm Pinecones by in-game means.

The event stages available right now are the (Christmas) Party ones. The New Year Challenge quests will become available on December 31st or January 1st, so we’ll have to wait a little bit for them.

As for the actual stages themselves, there is no set CP recommendations, since they are adjusted to the player’s CP. Basically, all partners will be set to around level 240, no matter what level they actually are (so for example you have a Nanalie on your party who is level 1, but in the event stages she will count as Nanalie level 240).

Of course, there are a couple of units that you can use for additional benefits, but as a new player, chances of having them are pretty slim. These are the bonuses they give:

If you’re not completely sure what these stats mean, make sure you check out our stats guide, where I’ve explained each and every one of them.

Ideally, you should aim to complete the Party 1 event stages as fast as you can, and them move on to the Party 2, and eventually Party 3 once that becomes available on December 31st, because the higher the stage, the better the rewards!

In this event, there are only 5 Daily quests and 20 Achievements, and the rewards are pretty average (still good, don’t get me wrong, but not as amazing as the ones in the Eternal Snowflake event). From the daily quests, you’ll be able to claim a total of 30 Christmas Stockings, 13 Handheld Lanterns, 40 Lost Mirror (or Dust), and 50 Diamonds every day.

These rewards are free, so if you want the Nanalie skin, you will have to log in every day. If you skip as much as one day, you won’t be able to claim it!

In the New Year Exchange shop, you will give the items you obtain from event stages to the Snowman, who will reward you with Chocolate Coins. Then, those Chocolate Coins can be used to exchange for the gifts you want.

The rewards you get can be of two types: normal discounts or grand discounts. Every 1-2 days, the rewards will change, and the items will go back to their original price!

Bear in mind that there’s a chance that you won’t be able to claim every single item. So, I would suggest that you save for the most important ones, such as SSR equipment, Summon and Selected Tickets, and the Kiraya Skin. So, what to take of all this:

– In the New Year Exchange you should always donate as much as possible before 7:00, so you get extra 10% Chocolate Coins.
– If you don’t need a specific item on discount, then keep the Chocolate Coins and don’t spend them just “because” (again, for the 10% extra Chocolate Coins at 7:00).

When to donate to Snowman?

The best time to donate your Holiday Bells, Christmas Stockings, and Handheld Lanterns is before 7:00, so you can get the extra 10% chocolate bonus. As for spending the coins, it would be best to spend them after 7:00.

What to spend Chocolate Coins on?

You can choose to buy anything you want depending on your needs, but if you are not 100% sure what to get, I would recommend the following items:

*I listed them with the discounted price, which is when I highly recommend that you get them.*

After gathering all the items I listed above, if you still got leftover Chocolate Coins, I suggest buying the following items, in this order:

The remaining items, such as Gold and other gift boxes are not really worth it in my opinion. The Chocolates are way more valuable than that, so you can spend them on better items.

In this New Year event, players will be able to support their favorite partners in a popularity contest. It’s basically a cross-event, or inception event if you may, that takes place during the New Year Market event.

Do you remember all the Sparklers you’ve been collecting for days, even before the event went live? This is where you spend them.

To take part in this event, you have to use the fireworks that you’ve been collecting before and during the New Year Market event launched. I believe you won’t be able to obtain these items during the event, only before it starts. However, I am not 100% sure of this, so I’ll update if anything changes.

If you want to collect event rewards, you will have to donate the fireworks you’ve collected, and depending on who the winner of the battle will be, you might get some awesome (or slightly-less-awesome) final rewards.

The main items for this event are:

If you don’t know how to get them, we’ve mentioned above how to get fireworks.

Of course, the battle is decided by players, so I suggest that you check out the rewards beforehand.

If you donate a total of 300k points, you will be able to claim the following:

Rewards Based on Your Rank / Ranking Rewards:

These rewards are for all players who have donated to the winning team (any amount), and they will be sent to the players’ inbox after the competition ends, on January 4th.

How to do the New Year Event the right way

You will be able to donate by tapping on the Support button underneath each of the teams.

Here are some tips from the previous Tourney event that might help you out:

– If you aim for the top 3 in donations (for the avatar frame), you might want to wait with your items until the event is close to ending, then donate them.
– Prioritize getting all your Point Rewards – they are super worth it!
– If you want the avatar frame that badly, but chances of getting it in the “winning” team are slim, you might have to donate to the losing team and get to top 3 there.
– If they will add premium support items in the Shop, chances are people will go for them. That means, if you want top 3, you might have to charge some money.
– To get the maximum number of support items, you want to use Diamonds to refill Stamina 5x / day and raid the stages a lot, so you have plenty of Pinecones.
– Always raid the highest level of event stages with the Pinecones, because they give the best rewards.

The New Year Challenge is a time-limited event where you can obtain a lot of useful loot, such as Dust, Selected Tickets, SSR equipment, and Summon Tickets. You will find this event from the event tab, under the New Year Challenge, or from Trials -> Miracle.

The event lasts until 8th of January.

This highly-premium pack comes at around $100, and it’s pretty much a lotto. You have a chance to obtain some unique items, such as premium skins and SSR partners, as well as SSR gear.

HOWEVER, and I mean a big however, the chances are very slim to get the jackpot.

This pack will be available starting with December 31.

My opinion on the pack:

If you got an extra $100 laying around, and you don’t mind spending them in the game, it might be worth it, since you get one SSR character of your choosing between the three, as well as a ton of gold and Diamonds. But if you want to get the pack just for the chance to get all the super skins, it’s probably not worth it.

I am still dwindling on whether or not I should get it, but still got plenty of days to decide. I am torn somewhere between 30% to get it, and 70% it’s not worth it, because it’s a lotto, in a gacha game.

Somebody who got the pack got the following items:

Courtesy of Krustee89 for their $100 sacrifice.

– Christmas Duke Kiraya: you can get from the New Year Exchange booth.

– Gingerbread Princess Nanalie: you can get from the Market Sign-in event.

– Gift Fairy the Enforcers: 118 Skin Coupons from the Shop.

I believe this would cover everything about the Christmas Event in Illusion Connect. Is there anything else that I’ve missed? Let me know down in the comments section below! 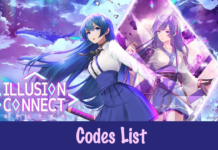 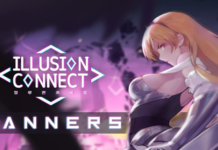 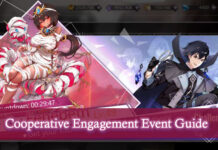