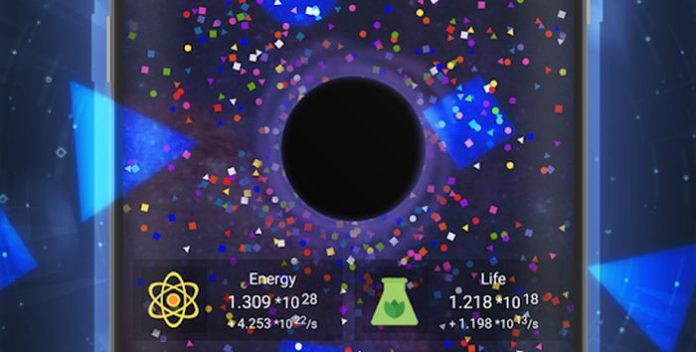 If you’re looking to create the biggest Black Hole that ever existed and feed it a huge universe, just to start over and do better next time, Idle World is the game for you. And we’re here to help you get the most out of this amazing game by sharing some Idle World cheats and tips in our complete strategy guide.

To be honest, I never thought that in 2019 I could enjoy a game that’s mostly icons and text as much as I enjoy playing Idle World. Everything works perfect in the game, from its fast pace to the tons of purchasable upgrades and the awesome music – proving that you don’t need fancy graphics to create a truly amazing and memorable game. And I am sure that if you give it a try, you totally understand why I’m saying.

But I am not here to praise the game – although it does deserve a lot of praise. Instead, I am here to talk strategy to help you build a bigger universe, so let’s get this started! Here are our Idle World tips and tricks.

Get those new elements ASAP!
You unlock new elements in the second menu at the bottom, by meeting requirements that involve reaching a specific level with some of the already unlocked elements. This is how the game goes and you should always work on unlocking as many elements as you can. 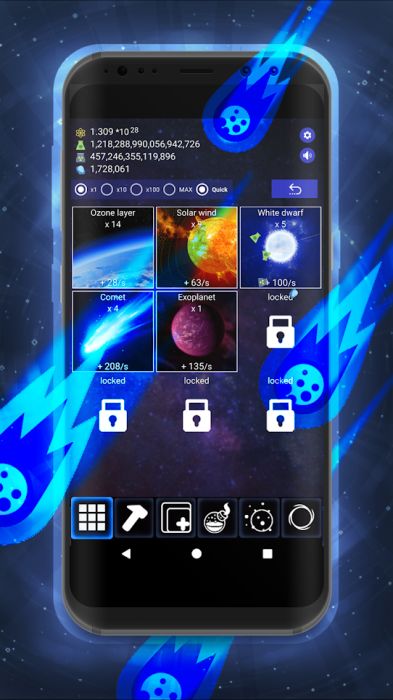 Newer elements are more expensive, but they also provide you with a lot more money, meaning that you can level up your existing elements faster and unlock even more.

This is the charming part of Idle World: you start from nothing and slowly evolve your universe to develop life, going (at an accelerated pace) through all or most of the evolutionary stages in the history. Simply knowing what new element or life form comes next makes the whole upgrade & unlock process worthwhile.

These are upgrades that give you massive boosts in income, so you should always have them in mind. I would say that they are a bit more important than unlocking new elements first, because they give you more money fast and therefore make it easier long term to unlock new elements.

Plus, you have some upgrades that simply multiply (by a lot) ALL the revenue that you have in specific fields, which is absolutely awesome! 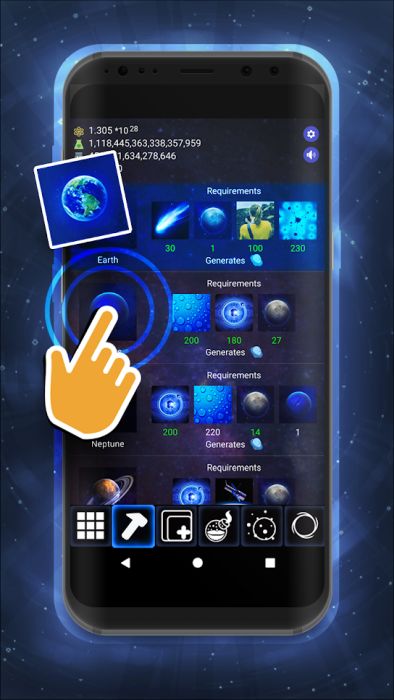 The scientist boosts are not that important
The game is still under development and many fixes and changes have been made while I was playing it, so this might not be true for future versions.

But right now, most of the scientists you can unlock in Idle World are not really that impressive. Apart from Albert Einstein, Sir Isaac Newton, Linus Pauling and Stephen Hawking, which give a massive income boost to multiple elements, the others are pretty weak.

But all of them are extremely expensive, meaning that you need a ton of upgrades to be able to unlock them. This comes somewhat naturally as you play and you should keep an eye on their requirements as well in order to prioritize high level elements, but remember that the other two upgrades are more important early on.

Double your idle income
Your universe is producing income even when you are away, just like every idle game out there, and once you do come back you have the chance to watch a video ad to double your income.

I strongly suggest doing that each time you have the chance. The developer of the game is not bombarding us with ads or IAPs, which makes watching those optional video ads even more important. And you double all idle income, so it’s a win-win situation!

Don’t forget that you can double your income for one hour if you tap the Universe overview button and watch an ad. Make sure to do that constantly as well in order to progress much faster! 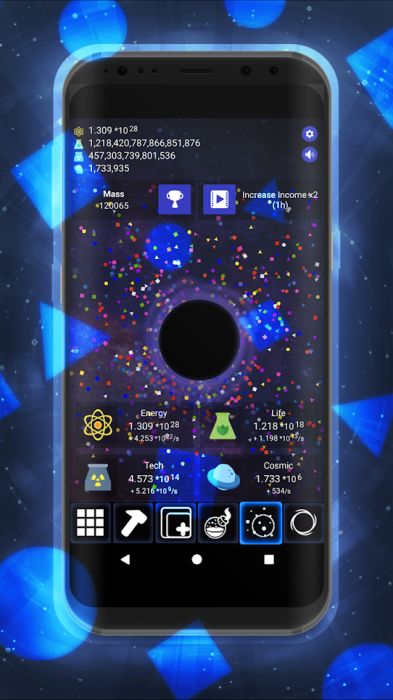 Try to find the balance when leveling up
Although I told you earlier that the newer elements produce a lot more money than the older ones, the truth is that you should still upgrade them all and level them up, even when a single level of an element costs more than 100 of another.

Finding the balance here is extremely important, as all income adds up. You will get the scientist upgrades and other income boosts in the end, increasing even the lower level income. And even though it won’t match the income generated by the latest elements you discover, they all add up.

So don’t simply ignore the starting elements, just start upgrading with the latest you have available and backtrack when you have no more money for additional upgrades.

Always use all the money you have when you get back to the game, focusing on the next thing you want to upgrade: a scientist, an income boost or a new element. Rinse and repeat.

Collapse Your Universe!
And when your universe is large enough, it’s time to feed it to the black hole and start over!

Whenever you do that, you will lose all your progress and start over, but you will get a permanent income boost. Try to always restart when that income boost is substantial enough to make it worth it. For example, get your first collapse when you are at around 1.5, then try to get at least an extra .5 increase of your income, if not an entire point (and maybe even more later on when the progress is faster)

This way, you still have enough time to enjoy the game and discover new elements, but also restart and give you a fighting chance, getting there to the more advanced elements a lot faster than otherwise.

These would be our Idle World tips and tricks. If you have additional recommendations for fellow players to help them get a larger universe faster, don’t hesitate to share them with us in the comment section below.