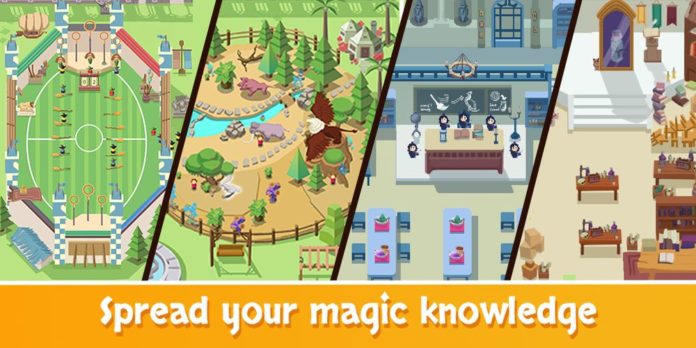 If you’ve ever dreamed about building up and managing your own Hogwarts (or any name you’d like to give your school of magic), Idle Wizard School allows you to do that. And does it in a charming way, with beautiful graphics and some lovely idle game mechanics.

But today we’re here to help you out with some Idle Wizard School tips and cheats in a complete guide that will allow you to progress faster, unlock more buildings and schools and overall have more fun.

So let’s not waste a single spell and instead, let’s check out below some Idle Wizard School tips and tricks in our guide.

Increase the capacity of the bedrooms

The bedroom capacity is extremely important, as it has a direct and massive effect over your general earnings.

The more students you have in your school, the more money you will generate. That’s simple, so make sure that you keep an eye on the dormitory upgrades and purchase new ones whenever you have the money.

These go hand in hand with the train, so keep an eye on it as well, making sure that you have the maximum number of cabins, in order for the train to bring in as many students as possible.

You can also reduce the number in between trains if needed: just keep an eye on the queue forming outside your school – if there’s no queue, you need more cabins and reduced time. If it’s a long queue, increase the capacity of your dormitories.

Keep collecting from the stores

To the right side of the bedrooms, you have four different stores that produce money at regular intervals. Remember to collect from those – and do so often, because they generate impressive amounts of money.

These stores can’t be upgraded or rushed up in any way, but they offer constant and high quality income – just make sure to collect from them regularly in order to keep profits flowing.

Focus on completing the quests

You receive quests one at a time in Idle Wizard School, and your main focus should be completing those one after another.

They basically work out nicely to guide you through the things that you have to do and structures to upgrade, while also rewarding you with much needed premium currency in the process.

Whenever you have quests that require you to upgrade a specific class to a specific level, focus on getting that done.

When quests change to something like have an X number of students attend a specific time, it’s free play for you: upgrade all the other classes and buy new stuff to keep profits optimized.

Unlocking new schools is practically the game’s way of prestiging: you basically start over, but with a massive boost to your overall income, which makes progress a lot easier.

As soon as you move on to a new school, tap the Schools button (near the quests one) and see what the requirements for moving on to the next School are. We’re talking here about reaching an amount of money in your bank, so play with that goal in mind.

This means that you shouldn’t aim to unlock classes that are similarly priced to your upgrade – that would be a waste of time.

For example, unlocking the 3rd school costs 5AA coins, with the Reading class costing 1AA. That is the final class you should unlock and work on before moving to the next school, because anything above that would be overkill (and would require a ton of time).

Instead, stop with the upgrades at the Reading class, get the required coins quickly and move on to the new school where progress will be a ton faster. Rinse and repeat.

It goes without saying that in Idle Wizard School, whenever you unlock a new class (which is generally more expensive), it’s that class that will soon become the most profitable in your school.

It’s easy to keep track of these things by tapping the Stats button in the top right corner (looks like some bricks). There, you will see which is your Less Efficient class and which is the Best, but also other stats related to money making and optimization.

Now, just because the more expensive class is the best one, it doesn’t mean that you should completely ignore other classes.

My recommendation is to instead start working on upgrades from the top to bottom, always looking to hit the next milestone level with each class.

These milestones are at levels 25, 50, 75, 100, 150, 200 and so on. Each time you reach a milestone, the income generated by that particular course increases by a ton. So make it your goal to upgrade each class to the next milestone.

Start with the most expensive you have, then move backwards: let’s say that you get Reading to 100. Don’t invest more here, but instead move on to the Mystical Beasts Class and get it to 400 or 500. Then go to the Piloting Class and get that to 400-500 or so.

The idea is to always have all classes at the highest milestone possible, but keeping costs in check. Eventually, upgrading your Herbalism class for example will no longer be cost-effective and this is why you should always work on your upgrades backwards.

Get new teachers and increase their salary as well!

Apart from the regular upgrades that we’ve talked about above, there are two other upgrades for the Idle Wizard School courses:

– Hire Teachers, which basically increases the number of people teaching that class. If queues for that course are always high, getting new teachers will greatly reduce them.

– Increase salary: this is a cheaper method that works on reducing the queues, by reducing the amount of time required for each course to be taught. These become more effective later on, as the timers go up a lot and the % decrease has a bigger effect.

You should always buy several Salary increase boosts before getting that second teacher, as it’s more cost-effective this way.

Keep an eye out for Mysterion, the dragon

Right above the dormitories, before entering the actual school grounds, you will sometimes see a Golden Dragon waiting by the gate.

That’s Mysterion, and it always has a nice offer for you, usually in the form of a massive pile of coins for watching a video ad.

Make sure to constantly tap on him and, if the offer is nice – usually it is – watch the ad for some instant income.

Another really nice bonus that you should always have active, in my opinion, is the Coin Amplifier. This one allows you to double your income, then triple it and so on by watching video ads.

You can go up to 5x your income for the next 2 hours and that something you shouldn’t say no to.

If you really hate watching ads, then at the very least double your income!

And there are also other opportunities that pop up every now and then, like instantly finishing courses (which is not extremely useful imho), or getting an influx of students to your school.

The latter is really good as it instantly sends a massive number of new pupils to your magic school, without taking your bedroom space in account. So even if your bedrooms are maxed out, you’re still getting those students, which helps tremendously with income and potential quest completion.

If you tap the bottom right button looking like a cart with a diamond in it, it will get you to the store. There, you will be allowed to spend gems on various Research aka upgrades.

Interestingly enough, you don’t have the option to buy this type of currency with real life money and you can only get them from completing quests. Which makes them even more interesting.

Either way, I would recommend you to skip the first research options that give you somewhat impressive boosts to your class income (but really expensive), and move down to some fairer priced upgrades.

For example, for just 30 diamonds, you get a 1% increase of profits generated by each city, while other Researches give you similar bonuses. Mix them and match them to get optimal results.

With the diamonds that you get early on (around 250), I recommend getting the Incantation Teacher (which gives you an income boost for the Incantations class – always useful when you start anew), then two Magical Facility upgrades for increased income from the cities.

This would be, for now, our Idle Wizard School guide. If you have additional tips and tricks for the game, don’t hesitate to share them with fellow players in the content section below.