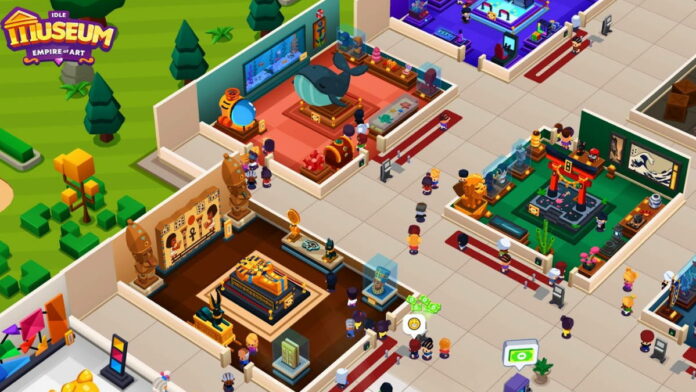 Welcome to the opening day of your own museum! Idle Museum Tycoon is a new idle/incremental game where you get to run your own museum. Build the galleries, maintain the museum floor, and ensure that everything is running smoothly and the guests are happy. Touch Tap Play is here today with a general rundown of how to make the best museum ever in our Idle Museum Tycoon: Empire of Art & History Strategy Guide: Tips, Cheats, and More!

After you complete the tutorial, your assistant will tell you about the quests menu, which can be accessed at any time by tapping the clipboard button at the bottom of the screen. You can have up to three quests at a time, and there is no time limit on any of them – take as much time as you need to complete them.

These quests are important because not only do they lead you down the general progression route, they also reward you with valuable gems that you need to get those special upgrades for your galleries. If you’re ever lost on what to work towards next, take a look at your quests and make sure to do them as soon as you can.

In the middle of the museum lies two vending machines. Periodically these machines will generate money for you over time, and when they’re ready to collect they will have a money icon floating above them. These machines net you a ton of money, even moreso than your actual galleries early on.

The amount of money you get from the vending machines scales with your museum’s general progress – you’ll probably notice bigger payouts the more upgrades you have purchased. If you’re actively playing the game (and we recommend doing so just for this very reason), make sure to keep collecting the payouts on your vending machines and you’ll be rolling in money in no time.

Idle Museum Tycoon is mostly a passive game, and there isn’t really too much you can control actively. With that said, there is one thing you should watch out for and that is bottlenecks. If your museum profits are slowing down, take a look around and you might see a specific part of your galleries or your entrance getting clogged.

The entrance of the museum is probably the first thing you want to deal with. The first thing to do is to reduce wait times, and then also build a new line. That goes for any of your galleries – if your lines are constantly full, upgrade them to hold more people. The smoother your museum can automate itself, the more money you’ll make when you’re away from the game.

Clean up and Maintain

Your museum will gather trash over time and you can tap on them to clean them up. You’ll get a nice amount of cash when you do so, which is another reason to keep the game open and actively play it. Sometimes you’ll even see a robber highlighted with a red circle trying to steal your exhibits, and tapping on him will capture him and reward you with lots of money.

Alternatively, you can also spend gems on hiring maintenance staff. The janitor will automatically clean up trash and earn more money than just tapping on the trash, and the security guard will take down the thief on her own. The maintenace staff costs a lot of gems however, and we don’t recommend it because they’re not even permanent. You’re better off spending the gems on the golden upgrades for each gallery.

That concludes our guide on Idle Museum Tycoon. Keep upgrading your galleries, watch for bottlenecks, and collect all the money from your maintenance bonuses. If you have any other tips or tricks to share, let us know in the comments below!