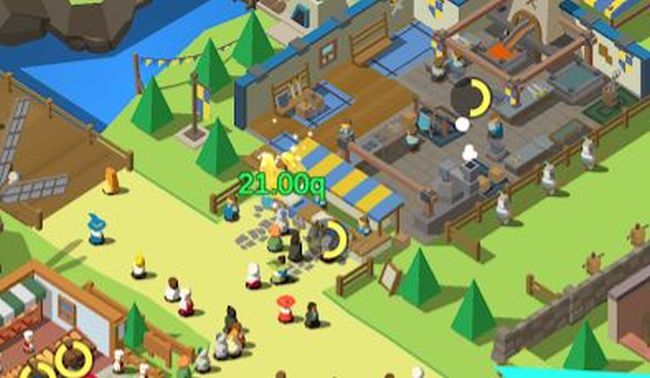 In today’s article we are going to go over all of the Idle Medieval Town tips and cheats to help you build faster and quickly develop your very own medieval town.

So if you have ever wanted to see for yourself how pickpockeeting, wizards and weapon shops all work together in harmony, then this is your chance. As funny as that sounds, the game will have a ton of ways for you to make money! After all, it is an idle game!

But enough with the introductions! You came here to learn all of the Idle Medieval Town tips and tricks, so let’s dive right into them right here below!

The only way that you can unlock more buildings is if you start collecting money. That can be done quite easily, by patiently collecting all the Gold from all of the buildings there. I suggest that you start by upgrading the overall production as that is a multiplier which will help you make more money in the long run.

You can unlock more buildings by heading on to the Town Hall building, which has listed there all of the buildings that you can construct. Some of the buildings can be unlocked once you have gathered enough Gold, but for others you will have to advance to the next town, which will give you access to all of the old buildings, as well as unlock the new one.

I suggest that you try to make this your number one priority, even though actually acquiring the Gold to make the upgrades will take a bit.

The upgrades to Prestige are pretty important too, because they will allow for more visitors in the town per minute. This can be found in the Town Hall, and is the very first option at the top. Make sure that you try to keep this as high as possible, and that your buildings can keep up with the customers.

All of the buildings in game will have various types of upgrades. The upgrades will help you serve more customers faster, and allow for a better service, which in return will bring you more money.

You should always upgrade the buildings in a way that will make it easier for you to make more money, while not losing customers. For instance, I always suggest that you start upgrading the Production Speed as that is one of the most important features when it comes to speeding up production.

These levels will give you also a multiplier to the Gold income, so it’s better for the profit. The best would you can do is to upgrade the better buildings first, a.k.a. the ones which give you the most profit.

The Production Speed is just as important, because if you have a high production speed, you will be able to manufacture faster, which results in making gold faster! This is an option which will reduce the number of unhappy customers (the customers who have the red angry face) because usually that happens due to very long waiting time.

Each building has a set number of staff members. You will be able to hire more, once you have gathered enough Gold for it. I suggest that you try and unlock the second staff member ASAP because it will speed things up a notch. Also, make sure that you upgrade those staff members because they are going to receive some speed boosts.

How to make money fast

If you want to know how you can make money fast in Idle Medieval Town, then there are quite a few ways. But for the beginners who are looking to make a ton of money fast without spending a ton of time idle waiting for the offline bonus, then let me tell you all the ways that I know of, to make money fast:

This option is a fast one, because it can give you quite a lot of money in a relatively short period of time. I suggest that you keep an eye out on the roads, and when you notice a suspicious looking face on the road (with a thief mask), you tap on it. That will let you open a new window which says Pickpocket.

When you do that, it will let you get some money for free! You can also watch an advertisement and get 10x the amount of money, and that is definitely something super useful! I suggest that you always select the ad option, as the amount of money is ridiculously higher!

One other thing to note is that the more you progress through, the more money you will receive from the pickpocket option.

Get Tribute from the Lord Messenger

This option will let you receive some random rewards from the Lord Messenger, which is the horseman that you will sometimes find in the stable there. I suggest that you tap on it and see which rewards it will give you!

This option appears every now and then, so try to claim it whenever it is there! You can also choose to watch an advertisement to increase the rewards by 10x, just like you would from Pickpocket.

The Lord Messenger will give you either Gold or Gems, so no matter which one you get, it will be definitely worth it!

Tap on the Entrance Stall to claim Gold

Next to the Town Hall, on the left, there will be a small stall which will give you some Gold for free! I suggest that you tap on this to claim the Gold that you can whenever you are able to! This is a super useful and easy way to make money, even tho it doesn’t give as much as Pickpocket or Lord Messenger.

Every day you will be able to send out your troops to Exploration, which takes several hours! This option will reward you with plenty of Coins!

You can see the exploration tents outside of the city, and if you tap on them you will see how much time your troops have left before they return. I suggest that you always send out troops to explore for 6 hours before you close the game and go offline, and even whole you are online. It’s not going to cost anything and it will give you Gold in return.

One more thing worth noting here is that when your troops return, you will be able to claim 2x rewards by watching an advertisement, or if you want to claim the rewards 3x, you can spend 20 Gems!

If you want to speed up Exploration you can do that by watching ads – that will reduce the time by 2 hours!

See a chest on the ground? Tap on it!

If you happen to spot a chest on the ground, odds are that you ran into a Gem chest. Make sure that whenever you spot one, you tap on it because it will give you some Gems for free, which will be super useful if you want to buy some premium buffs.

It can not be a medieval game without some quests now, can it? Well, you can find your list of quests in the top right corner of the screen. Tap on the tab with an exclamation mark and it will show you the tasks which you have to complete.

These quests will give you plenty of rewards, more specifically a ton of Gems. So if you are looking for ways to collect more as a f2p player, this is one!

Get free Gems in the Gem Store

As a f2p player you will be able to claim 60 Gems for free every single day, by simply heading on to the Gem Store (the icon in the bottom right corner) and then selecting the first option that you see, which lets you play an advertisement and rewards you with 20 Gems.

You can do this 3 times a day, so if you want to upgrade the city using Epic Upgrades, this is one easy way to get more Gems!

Do some Epic Upgrades

The Epic Upgrades can be found in the bottom right corner of the screen, the middle button. There you will see a list of tasks which each cost Gems to upgrade. I suggest that you save up Gems to buy the Pub Production Time Reduced by 50% which costs 300 Gems, or one of the other ones which reduces the production time.

There is also another one which I really like, the Increase the Territorial Income by 100% (situated at the bottom). This one will give you a boost to the overall income. Try to level up all of these upgrades eventually, but start with the most useful ones first.

In the upper right side of the screen you will be able to watch ads and claim some super boosts for a limited period of time. I suggest that if you are looking to make some money fast, you watch an ad and receive one of these boosts. If you want to go that extra mile, you can choose to watch multiple ads and activate multiple boosts at the same time!