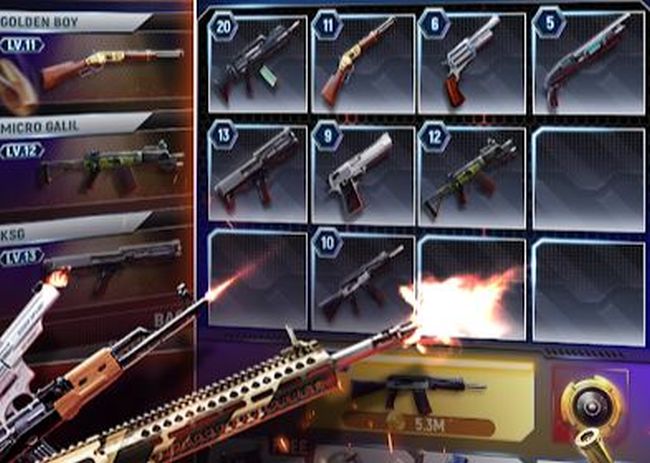 In today’s article we are going to share with you all of our Idle Gun Tycoon tips and cheats to help you get more guns and improve the ones that you already have.

The game is a fun idle game which lets you evolve various guns and turn them into more powerful firearms, and all that with hopes of never missing a target again and passing more stages!

At the very beginning I was having my doubts as to how this game can be called “idle” but then it all came together when I actually realized how it worked and I started playing it more and more!

So if you are here to learn all the Idle Gun Tycoon tips and tricks that we have discovered while playing the game, then you’re in the right place! So let’s not waste another second and dive right into them!

There are some in game money which you can use to buy new weapons, and those money are given to you over time (hence why this is an idle game). There are a total of 12 empty slots where you can have weapons, so try to always buy as many as you can and combine them.

Spending your money on weapons is the most important thing early on because it will let you get to a good enough weapon to pass the stages much easier! So I suggest that you try and do your best to mix and upgrade as much as you can.

Play the stages with your best weapon

The levels are not your typical stages of the game, in the sense that all they require you to do is to aim at the targets and shoot them down before the time runs out! You can advance through the stages and that will give you some extra money, so try to do it as much as you can.

All that the stages are coming down to is shooting the bottles which are lined up there, so try to aim at them as best as you can because there is a timer and if it runs out, then you will have to try again!

This is an option which will appear when you finish a stage successfully, and it will allow you to watch an advertisement and claim 2-4 free Diamonds / Gems! If you want to save some premium currency as a f2p player this is a very good thing that you should do, especially because all it takes is watching an ad, which takes at most 30 seconds!

Wait for the aim to calibrate

While you are playing the stages, you will continuously shoot at the bottles placed in front of you – well, one thing that you always need to do in order to pass more levels faster and better is to wait for your aim to calibrate again.

That is, because every single time after one shot your aim will move due to the recoil and that’s why you need to wait for it to get back on track! Once it’s all good and set, you can feel free to shoot once!

Always aim at the middle

This is a little something which you should definitely keep in mind because it is very important if you don’t want to run out of time while passing the stage. The bottles, depending on the level that you are on, will become tougher and tougher to break.

That is why you should always be patient and try to shoot in the “glass” part of the bottles – their middle, because that is the most fragile part. Do this because it will help you break the bottles in 1 shot instead of 2 (or more, sadly).

Take advantage of the luck upgrades

Every now and then while you’re mixing and matching guns, you will run into a luck upgrade! That is indeed lucky, because it will give you a free upgrade up – what that means is that if you have a level 8 weapon for example, and you get the luck upgrade, that weapon will turn level 10!

So it will completely skip a level and get to the next one! That’s why this option is super useful, because especially if most of your weapons are high level, then the chance of getting high level upgrades is higher!

I suggest that even if it “costs” watching 1 advertisement to use this, you still do it because it will definitely be worth it and save you a lot of time!

Use your best weapon for the stages

It should go without saying that you should always use the best weapon that you have and the one that you feel most comfortable with to play with during the stages, because it will make a big difference.

The better your currently equipped weapon is, the more damage it will do and you will need less shots to completely destroy the object ahead.

Choose your favorite weapon and master it

As you unlock more weapons you will be able to switch between them as you please and play the stages with different weapons as you please. I would suggest that you try and check all of the weapons out starting with number 9 and up, because for the earliest stages of the game they will do just fine.

Also, you should master a couple of them and play with them so that you will get used to how their aim works, the reload speed and of course, how many bullets they have! I personally really like the Golden Boy (number 11) for easy to hit targets, and the Micro Galil (number 12) for items which require multiple hits.

Just give them all a try and check out all the different play styles!

Take your time and practice in the Range

In the Range you will be able to practice the shots and use the various weapons to take out targets. There are also a few rewards which you can receive for playing in here, so try to do this before the normal game stages whenever you want to put to use a new gun.

Another good part about playing in the Range is that you will be able to claim a lot of Diamonds and money, so try to play whenever you can, especially if you’re running low on currency!

You can also watch an advertisement to claim even more goods, so if you’re not against it, feel free to do it when the pop up appears!

When you are out of money and you really want to make a lot of them relatively quick, then say no more – the game is an idle game for a reason! So whenever you are going offline, it will keep on producing money for you!

All that you really need to do is watch an advertisement to claim 4x the rewards while offline! That is super worth it, and even if you go offline for just 20-30 minutes it will still be a big boost to your money!

Open the Supply Crate with guns

In the bottom left side of the screen you will have a Supply Crate which contains several items inside. You can watch a short advertisement to open it and claim all the weapons inside, you will have a given number of random weapons (which cannot exceed the level of your highest weapon).

The Supply Crate works the same as if you were to actually buy weapons – you tap on the crate and it will give you a random weapon in one of the empty slots. You can keep doing this until the weapons in the crate run out!

So if you want a free way to get more weapons, this will definitely do the trick!

Speed things up a notch

Because the game is generating money passively without you having to do anything pretty much, all that you need is time and the money will come. Well, for that there is a speed up which will let you get a 5x speed of the game!

You can stack this speed up multiple times by watching more ads, so if you want to really boost your game, this is the way to do it!

My suggestion would be to watch as many ads as you can until the bar fills up, and then you will have the maximum possible time for the 5x speed up. Then, once it expires, just do it again and again and you will find yourself making some super powerful guns pretty fast!

If you want even more boosts and bonuses, then there is always a lucky wheel which you can spin and try your luck! This is located in the bottom side of the screen and in order to spin it you will have to pay either 20 Diamonds or watch an ad!

I really don’t suggest using the Diamonds for it, because the ad is free and you never know if it will be indeed worth it the 20 Diamonds! So just watch the ad and spin it whenever you can without spending premium currency.

If you find yourself in a situation where you have a level 1 weapon left over from centuries ago, then you might want to think about recycling it instead of buying all the other weapons to make the upgrade.

To sell an unwanted gun, you must make sure that you have at least 5 weapons on your board, plus the one that you want to get rid of. Afterwards, just drag and drop the weapon onto the Recycle button in the bottom right of the screen and that’s it!

These would be all of our Idle Gun Tycoon tips and tricks that we have for you right now! Is there something else that you know about the game and would like to share it with us? Feel free to leave it down in the comments section below!