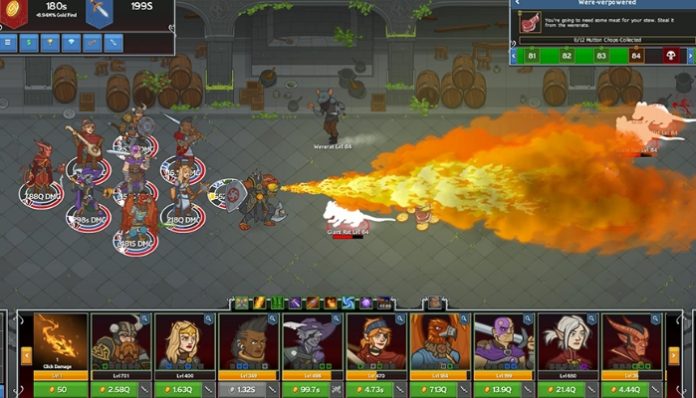 Idle Champions is an idle game set in the high fantasy world of Dungeons & Dragons. Recruit fan favorite champions from the series and claim glory! Take advantage of the unique “Formation Strategy” system where your champions can be rearranged at any time to provide buffs and supports to other champions. Our Idle Champions cheats and tips will show you how to become a formation pro!

Idle Champions is a worthy entry into the idle genre, where it provides just enough depth and strategy to keep it from just becoming another idle game. Let’s jump right into the formation strategy mechanic with our Idle Champions cheats, tips and tricks strategy guide!

The key to success in Idle Champions is having the proper formation setup for your champions. You’ll notice that almost all of your champions will eventually learn a passive ability that buffs nearby champions in some fashion or another. 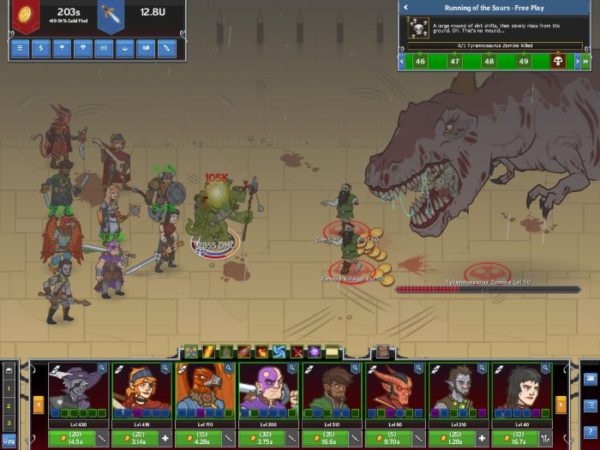 For example, Celeste increases the damage of all adjacent champions, so you want to put her next to as many champions as possible. The middle slot lets her cover the most ground, so that’s the best spot for her.

This is just one example of the many, MANY possible formation combinations that you can come up with. Pay attention to whenever a champion learns an ability that affects others, and adjust your formation accordingly.

Test out different possibilities and keep an eye on the total DPS meter at the top left, as it’ll help you decide which formation is the most efficient.

The achievements in Idle Champions aren’t just for bragging rights – they actually help your team out! Each achievement you fulfill grants a flat permanent bonus to your team’s damage by 1%. So say you’ve completed five achievements, then your team would be doing 5% more damage at all times.

As you can see, this can stack up and make your team much more deadly, so try to complete as many of the achievements as you can. The trophy icon will show you the list of achievements, so refer to it often to see what you can work towards. 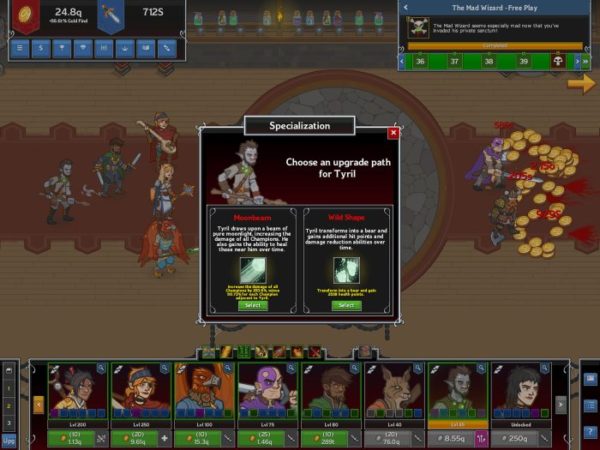 Use your ultimates on bosses!

Bosses are particularly threatening foes, towering above normal enemies with loads more health. You’ll need to take them down fast, as the longer you let them live, the stronger they get. If the fight drags on for too long they’ll start wiping out your champions in one hit!

You’ll get treasure bags after clearing a section and taking out the boss. Treasure bags often have a decent amount of gems in them, the premium currency of the game.

However, unlike most mobile games, there’s really no need to hang onto gems – you can spend them as soon as you get them.

You can use gems to purchase chests, which contain a random amount gold but most importantly gear for your champions. Remember: gear isn’t lost upon ending your campaign, so treat gear like a permanent upgrade to your DPS.

Get the party damage upgrades first!

When you’re upgrading your champions, the little icon next to their upgrade button will show what their next major upgrade is. If you see a sword with two fans coming out of it, that’s a party upgrade.

These upgrades increase the damage of your entire party, making them the most important upgrade. If you see that one of your champions is about to get one, prioritize it! You’ll get a massive DPS increase once you get it.

That’s all for Idle Champions! If you have any other tips or tricks to share, let us know in the comments below!