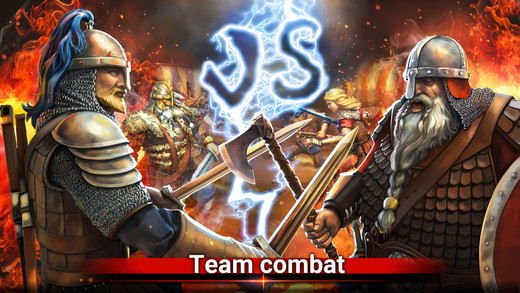 Sharpen your weapons, it’s time to raid in I, Viking! I, Viking is an exciting new action RPG that plays in real time multiplayer! Join five other viking players in fierce, competitive 3-on-3 online battles! You’ll be raiding a village for all of their treasure, but the enemy team is there to do the same, so it’s your job to make sure they don’t get away with a single coin. It’s a tough battle to fight, so we’re here with our I, Viking cheats, tips and tricks strategy guide!

I, Viking is a surprisingly complex and in-depth game for a mobile game, so there’s a lot to go over here. In our I, Viking tips and strategy guide, we’ll be going over various combat tips and tricks we’ve discovered with our time in the game.

1. Don’t forget about your block!

It’s important to remember that any of your characters can block! Blocking is very important because it can be performed at any time without waiting for animations to finish. If you block light to medium hits, you’ll completely negate the damage. If you’re hit with a skill or powerful blow, you’ll reduce some of the damage, but not all. Regardless of whether or not you get hit with normals or skills, blocking too much in a short period of time will cause you to start getting knocked back with each hit. If you continue blocking even after that, your guard will break and you will be stunned! This almost always guarantees a swift death, so don’t hold your guard for too long.

There’s also a neat trick you can do with blocking. We mentioned that you can interrupt any of your normal attack animations with a block, but when you do so your regular attack comes out very quickly after you stop blocking. You can effectively do “attack cancel combos” using this technique, though its usefulness is still being tested.

2. Stick with your team!

While it’s near impossible to communicate properly with your other two teammates during online battles, it’s best to stick near them as much as you can. You will have a much greater chance taking down the enemy team when you have a numbers advantage. Going off of the tip above, if you’re the first to engage an enemy, that enemy will stick on you until you run from the battle or it dies, so it’s best to block as much as you can while your teammates take them down.

The only time it is advisable to split up is during the first phase of the round where both teams are trying to find the key to open the castle gates. You should split up from you team so that you can pillage as many houses as you can, hopefully leading to your team finding the key first.

Keep in mind that you can switch between your two characters at any time, so make sure you use both as efficient as possible. When you start pillaging with one character for example, your other character will just run up to the door and stand there waiting for your first character. Why not command them to pillage another nearby house? The AI-controlled character will do their best to stay close to your character, but sometimes it’s better to switch to them manually. Sometimes AI characters will refuse to use their skills, so switch to them during combat and use them yourself.

4.  Use the village to your advantage!

After the castle gates are opened, the village’s Militiamen will grow in numbers. The mighty “Sir” knights will also spawn, and these guys are extremely dangerous! They can take out any low level character with two or three hits, but you can also use them to your advantage. Take note of where they spawn, but be careful – they will attack anyone who gets too close to them. Say you’re getting chased while carrying a torch – try luring enemies near the Sirs. They might get close enough to get hit by one of them, and once you get hit by these guys, the stagger is so severe you usually can’t escape the second hit.

That’s all for I, Viking! If you have any other tips or tricks to share, leave a comment below!