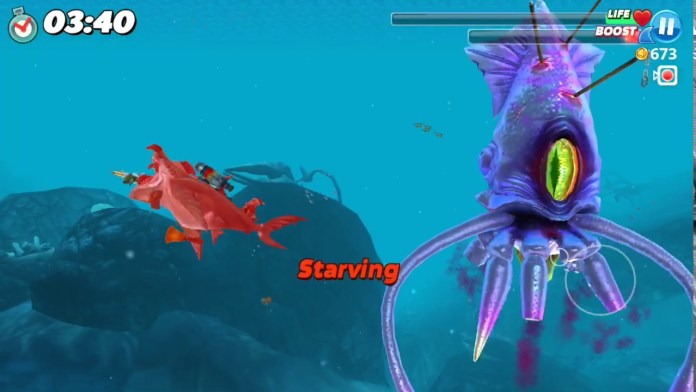 Hungry Shark World is an addicting shark game. You must take on the role of a marine predator and rise to the top of the food chain. In addition to eating all living things and unlocking new sharks, there is also a boss fight in the game. And in this guide, we’ll show you how to defeat the Colossal Squid.

How to Find Colossal Squid in Hungry Shark World

Colossal Squid is the only boss in Hungry Shark World so far and the battle with him is different from the boss battles in the previous parts of the series. But to fight the boss, you need to find him. You can find the Colossal Squid in the Pacific Ocean near the islands. Look around New Zealand and you will most likely find a boss arena.

RELATED: How to Get Mecha Sharkjira in Hungry Shark World

How to Defeat a Colossal Squid

First, you need a large shark, a very large, Apex or XXL will do. It is because with smaller sharks, you may not survive Colossal Squid attacks.

When the battle has begun, you need to inflict damage on his eye. Watch out for his massive ink attacks as well as his two large tentacles. When you get to the vulnerability stage, you will be able to attack the appearing beak and 8 arms. On each hand, you need to destroy 3 segments. When doing this, also avoid the attacks of the tentacles, otherwise, the Colossal Squid will drag you into its beak. Of course, he will not constantly keep his hands in sight and switch between the first and second phases. After destroying all hands, you need to deliver the final blow to his eye. And done, you have defeated the main boss in the game.