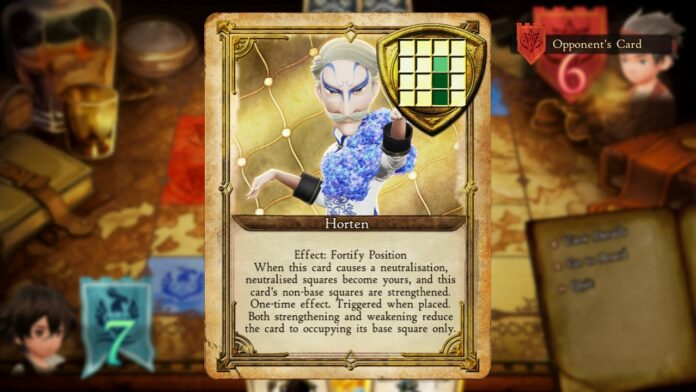 Bravely Default II, true classic RPG fashion, features an optional card game called Bind & Divide, or B & D for short. While it is no Triple Triad, this card game can be quite engaging, as it comes with a unique set of rules that make it fun to play every now and then.

While playing B & D is completely optional, you will want to learn how to win at this game, as you must win some games to unlock the Gambler Job and complete select quests. And you will have no problem doing so if you continue reading on, as these tips will let you become a Bind & Divide master in no time!

You can unlock the Bind & Divide card game after defeating Anihal in Chapter 1. After having done so, head over to Savalon’s Gambling Hall, and speak to Shirley. Doing so will also start a side-quest that will unlock the Gambler Job upon completion.

Bind & Divide basics are pretty simple. Both you and your opponent take turns playing cards on the field with the objective of conquering as many territories as possible, represented by squares. The player who claimed the most squares wins the match.

While the B &D basics are simple enough, winning is most definitely not. Cards all come with some unique properties that shake up the game quite a bit. When building your deck, you should always include at least on Character Card that grants a permanent special effect without having to be placed on the board. This type of card should also be played after the opponent has used their own Character Card as well, as you can negate its effects with your own.

Job Cards are quite good to have in any deck as they can strengthen any Monster family. As such, you should always try to have yours out while neutralizing the opponent’s.

This may be kind of a given, especially if you have played Final Fantasy VIII’s Triple Triad to death. Whenever you have the chance, you should always claim squares in the corner and to the sides. By doing this, you can claim territories that are easy to protect and pretty much impossible to flank if you play things right.