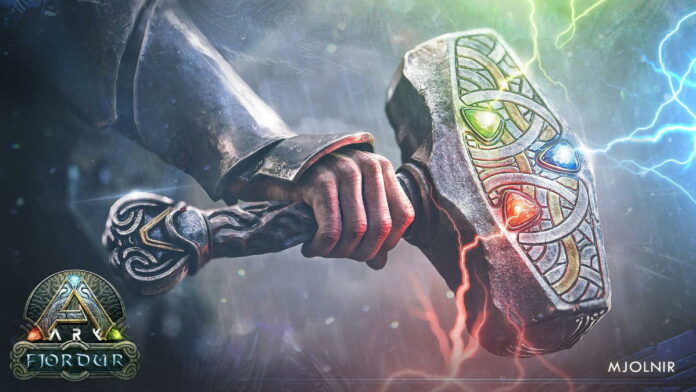 ARK: Survival Evolved’s latest DLC map, Fjordur, is all about Norse mythology. As such, there are lots of references to popular mythology, like the legendary hammer Mjölnir! You can actually use the mighty hammer yourself in the new map, but first, you must prove your worth. Today, we’ll show you how to wield Mjölnir in ARK: Survival Evolved Fjordur map!

How to Prove your Worth and Wield Mjölnir in Fjordur

Mjölnir is the mighty weapon that belonged to the thunder god himself, Thor. Whether you’re a mythology enthusiast or you really like the Marvel Comics’ version of Thor, you’re probably excited about the chance to get your hands on the mythical weapon.

In ARK: Survival Evolved, the Mjölnir is a weapon skin that you can obtain in the new Fjordur map. You must defeat the final boss of Fjordur, the legendary wolf Fenrisúlfr, on Alpha difficulty in order to get the weapon skin. Don’t get too excited just yet, as you’ll need to do other things before you can wield Mjölnir!

The Mjölnir weapon skin can only be applied to a Tek Sword, which means you’ll need to get the appropriate Tekgram for it first. You also need to find all 200 Runes, which are basically Fjordur’s version of the Explorer Notes. If you beat Fenrisúlfr early and attempt to use Mjölnir, the game will tell you that you’re not yet worthy. Here are all the conditions you must fulfill:

Related | What is the New Boss in the ARK Survival Evolved Fjordur Map? – Answered

Once you’ve proven your worth, you are now ready to wield Mjölnir! In addition to the normal Tek Sword moves, Mjölnir comes with a unique set of abilities.

Now you wield the power of the thunder god! The Mjölnir is quite possibly the hardest weapon to get in ARK: Survival Evolved, so we wish you luck on your journey. If you have any other questions about wielding the Mjölnir, let us know in the comments below!

How to Wield Mjolnir in ARK: Survival Evolved Fjordur Map