Home Game Guides How to Use Wythir the Crowned in Raid: Shadow Legends 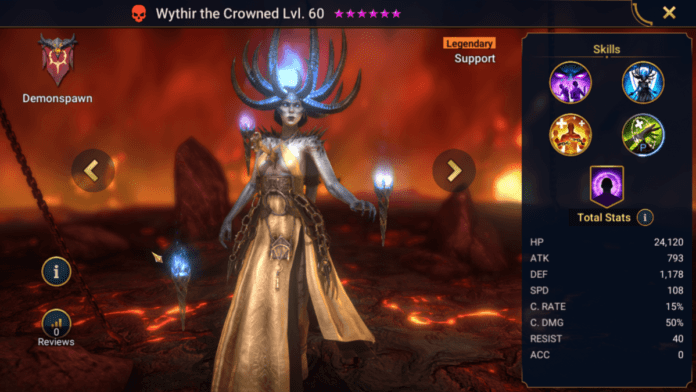 The game heavily relies on its Champions, of which there are a whopping 400+! Today we will be talking about one of them: Wythir the Crowned.

Wythir the Crowned joins Teleria as the queen of the Demonspawn. She aims to keep all her Demonspawn brethren alive with a significant amount of healing.

She is primarily played as a healer and that is generally the way to go for most players.

With an AoE A1, she is amazing at using Leech on a good chance to land. She loves to place Continuous Heals with her passive placing at the start of each turn, and randomly on her A1.

Her A2, on the other hand, is where she will provide an Increase Defence buff, increase the duration of Continuous Heal buffs, and also activate ALL continuous heal buffs. Along with that, her A3 also brings a full team debuff cleanse along with an additional 30% AoE heal!

As far as party placement goes, Wythir fits almost any lineup but is especially amazing in a Demonspawn lineup.

How to Use Wythir the Crowned in Raid: Shadow Legends