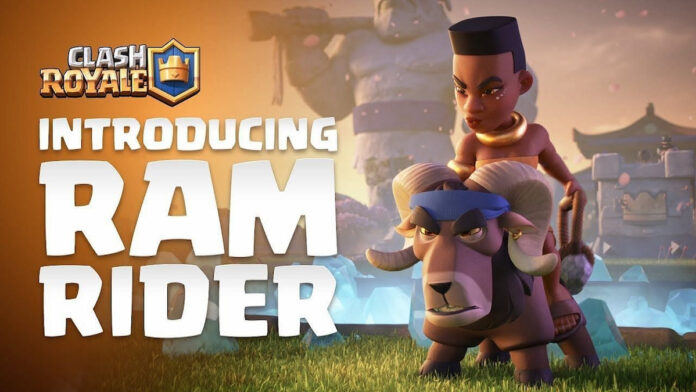 Clash Royale remains one of the most enjoyable free-to-play strategy card games that allows you to collect cards from chests and craft their decks by using procured cards.

These cards can similarly be used to battle 1v1 and 2v2 battles, which in the end, can earn you chests that contains gold and cards of different rarities. Since cards in Clash Royale are categorized into five rarities, Common, Rare, Epic, Legendary, and Champion, we’ll be taking a look at the Ram Rider, a new legendary card that you can unlock.

Ram Rider is described in Clash Royale as: “Together they charge through the Arena; snaring enemies, knocking down towers… and chewing grass!?”

This is a solid Legendary card that players can obtain if they reach Arena 10 of the game’s Hog Mountain. The Ram Rider also has moderate hitpoints as well as high damage per second. The gameplay sees the Ram targeting only building units while the rider attacks troops by slowing their movement speed.

It’ll cost each player 5 Elixir to play a Ram Rider card with 1461 hitpoints and 122 damage per second at the base level. There are 14 levels in the card currently, with room for more in the forthcoming Clash Royale updates.

Overall, the Ram Rider is a fine Legendary card that deals ranged damage and charge damage. It’s also one of the two troop cards that has the “Ranged Ground and Air targeting unit riding on Melee Building unit.” Note that the Rider cannot perform solo attacks. If the Ram is destroyed, the Rider is unable to attack buildings.

How to Unlock Ram Rider in Clash Royale