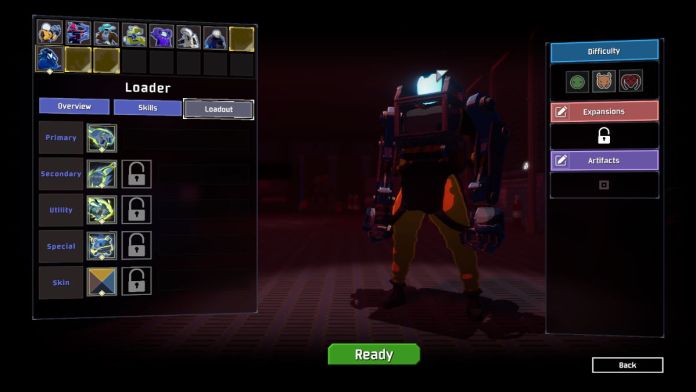 Risk of Rain 2 is a fast-paced third-person shooter with roguelite elements. Players will face off against the hostile fauna of the planet, among other entities, while collecting loot and new weapons. You’ll even rescue and unlock new playable characters under the right conditions. Today, we’ll show you how to unlock every character in Risk of Rain 2!

Unlocking All Characters in Risk of Rain 2

Players will start Risk of Rain 2 with only the Commando and Huntress as playable Survivors. These two Survivors have simple play styles and help first-time players get used to the game’s feel.

Additionally, if you have purchased and installed the Survivors of the Void DLC, you will unlock the Railgunner immediately, a new DLC exclusive Survivor.

Acrid is a volatile lizard-like creature that spews toxic acid on its foes. You must complete the …To Be Left Alone challenge to unlock Acrid, which requires you to finish all nine challenge cells in the Void Fields. Once you reach the Bazaar Between Time, there’s a hidden cave with a purple portal that leads to the Void Fields.

The Artificier is a powerful mage that attacks with various elements. She is unlocked after completing the Pause. challenge, which requires you to free the Artificer. Save up 11 Lunar Coins, then spend one on any Newt Altar. This will cause a different portal to spawn later.

Once the teleporter is done charging, take the blue portal instead to head to the Bazaar Between Time. Pay 10 Lunar Coins to free the Artificer trapped in the crystal.

The Bandit is a quick and deadly Survivor, utilizing powerful guns and knives to take down his enemies. He is unlocked after completing the Warrior challenge, which requires you to beat three stages without dying.

The Captain is the commander of the UES Safe Travels, and he is capable of calling down orbital strikes. He is unlocked after completing the Washed Away challenge, which requires you to simply beat the game once.

The Engineer is the master of gadgetry, utilizing all sorts of tools to overwhelm his enemies. He is unlocked after completing the Engineering Perfection challenge, which requires you to complete 30 stages in total. Your completed stages are tallied across runs, so you don’t need to do it all in one run.

The Heretic is a secret character that has completely mastered void weaponry. She is not a traditional character in the sense that you do not unlock her—instead, you must find all four Heresy items: Visions of Heresy, Hooks of Heresy, Strides of Heresy, and Essence of Heresy. Collecting all four items will automatically turn you into the Heretic.

The Loader is a pilot utilizing a powerful exosuit to throw powerful punches. She is unlocked after completing the Guidance Offline challenge, which requires you to defeat the Alloy Worship Unit in Siren’s Call, the stage with the giant ring ship.

In Siren’s Call, Alloy Vultures will spawn throughout the map. There are six nests that you can destroy, and upon destroying all six, the Alloy Worship Unit will spawn near the middle of the stage.

MUL-T is a modified utility bot that is now a formidable fighter, utilizing both close and long-range weaponry. It is unlocked after completing the Verified challenge, which requires you to beat the very first stage five times.

The Mercenary is a skilled sword fighter that uses his razor sharp katana to cut down enemies. He is unlocked after completing the True Respite challenge, which requires you to obliterate yourself at the Obelisk found at the secret area, A Moment, Fractured.

REX is a half organic, half mechanical production of a failed hybrid robotics program. It is unlocked after completing the Power Plant challenge, which requires you to fix REX in the Abyssal Depths with a Fuel Array.

At the beginning of any run, examine the back of your Escape Pod after you get out to pick up the Fuel Array. If at any point you fall below half of your maximum health, the Fuel Array will explode and deal massive damage to you and anything nearby.

This means that you must make it all the way to the Abyssal Depths—one of the possible fourth stages—without letting the Fuel Array explode. Depending on your Survivor, this can be tricky to accomplish, so we recommend one of the sturdier Survivors.

The Void Fiend is another new Survivor added with the Survivors of the Void DLC. Unlike the Railgunner, Void Fiend is not unlocked immediately—you must complete the Dragged Below challenge, which requires you to beat the final boss in The Planetarium or complete wave 50 in the Simulacrum.

There are multiple ways to reach The Planetarium. The first way makes you get to the Void Fields and then take the Void Portal and not the Null Portal. You’ll end up in the Void Locus, a new hidden stage.

Here, you’ll need to seek out and activate the four Deep Void Signals. Upon activating one, the entire area will fill with toxic Void Fog, and a shield will appear around the signal. Stay within the shield while fighting off incoming enemies. Once the signal is finished charging, the shield will drop and the Void Fog will dissipate.

You must repeat this process for all four Deep Void Signals, so it is quite the task. Upon charging all four signals, a new Void Portal will appear near the top of the stage, so head up there to reach The Planetarium.

The other method is a little easier. You must reach Commencement and defeat Mithrix as you would normally when trying to beat the game, but after you beat Mithrix, head back to the Primordial Teleporter at the beginning of the stage.

You should see a glass frog sitting by the teleporter. Pet the frog by giving it one Lunar Coin, and you must do this ten times, for a total of ten Lunar Coins. After you’ve petted it for the tenth time, a Deep Void Portal will spawn that takes you to The Planetarium.

That concludes our guide on how to unlock every character in Risk of Rain 2. If you have any other questions or tips, let us know in the comments below!

How To Unlock Every Character in Risk Of Rain 2